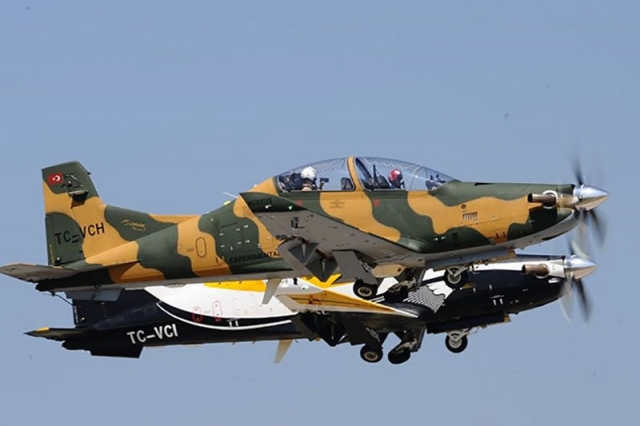 Turkish fixed-wing aircraft export drought to come to an end

On 19 November 2021, the Turkish Directorate of Communications confirmed that Hürkuş aircraft are being sold to the Armée de l'Air du Niger (Niger Air Force).

Cost details of the export deal are undisclosed, but the transaction was announced on 11 November by Turkish Aerospace Industries (TAI) CEO Temel Kotil in an interview with TV channel CNN Turk. Kotil said that the first Hürkuş-B trainer will be delivered to Niger by mid-2022 but he did not specify if the Hürkuş-A civilian aircraft and Hürkuş-C light attack aircraft have also been sold to the African country. However, Kotil did say on 25 April 2021 that an unnamed country was close to signing a deal for Hürkus-C. The buyer was not revealed at that time, as the contract was yet to be signed.

TAI designed the Hürkuş-C to support a wide range of missions in Turkey’s training programmes. More than just training up pilots, the lower-cost, Hürkuş-C was developed to perform in light attack and armed reconnaissance missions. This version has the benefit of offering a flexible solution against asymmetric threats which are becoming common on today's battlefields.

The Hürkuş-C has 7 hardpoints, with a total capacity of up to 1,500 kilos that can be utilised on missions at high altitudes and over demanding terrain, under day or night conditions. It can use general-purpose bombs and Turkish-made ammunition developed by Roketsan and the Defense Industries Research and Development Institute (SAGE). The aircraft will also be able to carry two 12.7 mm and 20 mm gun systems, a 2.75-inch rocket assortment, or training bombs.

The agreement between Niger and Turkey can be seen as the fruit of an African tour made by Erdoğan in October 2021, after which Nigeria ordered a pair of new Offshore Patrol Vessels from Dearsan. Just as significant is the fact that the Hürkuş deal with Niger is the first overseas sale of Turkish-made fixed-wing aircraft since the 1940s.

Turkey has seen growing success in arms exports to Africa since 2018, including various Mine-Resistant Ambush Protected (MRAP) vehicles to Libya, Somalia, Uganda, and Kenya. Bayraktar TB2 UCAS' have been supplied to Libya, Ethiopia and Morocco to date.

There are mixed views on whether the contract will be concluded given that Niger is amongst the poorest countries in the world, but current information supports the view that it will be successful.