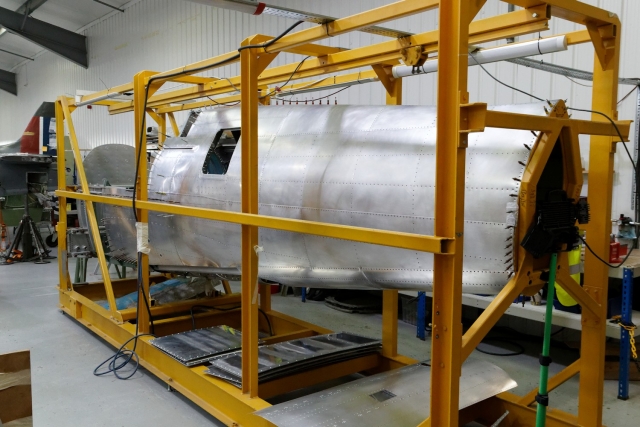 Third Dutch Spitfire (and others) at Biggin Hill

Discovered during a tour through the Biggin Hill Heritage Hangar was the fuselage of what will become the third airworthy Dutch Spitfire, Mk. I P9372 (construction number 6S/30563). The restoration project is said to be part of a package deal when Dutchman Frits van Eerd bought his Spitfire Mk.XVI TB885 (now PH-FVE) earlier from the BHHH.

P9372 was shot down by a Messerschmitt Bf109 and crashed near East Guildeford, Rye on 9 September 1940. The wreckage (or what was left of it) was finally excavated from the crash site, and displayed at the Tonbridge Battle of Britain Museum. These parts were acquired by Peter R. Monk of the Biggin Hill Heritage Hangar Ltd and put on display in the hangar in 2016. The restoration project of P9372 was registered in the UK as G-CLIH on 5 August 2019. 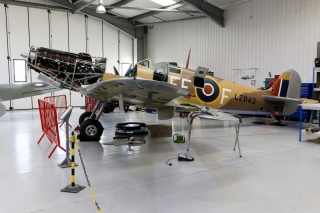 Spitfire Mk.IX LZ842 (CBAF.5056) was one of the machines offered to the SAAF (serial unknown) It arrived in Cape Town on 28 April 1948 and served until 1952. It was then disposed of as scrap but fortunately not melted. It remained at a scrapyard until 1989. Parts of it were then shipped to the UK while the forward fuselage frame & some small parts were sold to Australia in 1991. These components were used for a static restoration project which was completed in 1998 as "RAF LZ842/EF-D”, named “Kathleen Mary".

Peter Monk acquired the machine in 2003 with the intention of returning it to airworthy condition. Mark Bennett became its owner in 2005 and had the project sent to Sandown. He registered LZ842 as G-CGZU in March 2012 and the restored fuselage arrived at Biggin Hill in November of that year. G-CGZU is painted in desert camouflage as “LZ842/EF-F”. 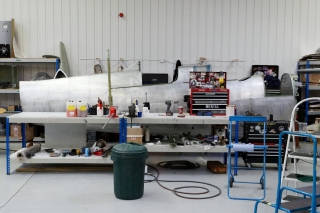 Another Spitfire restoration project at Biggin Hill is that of EN570 (construction number 6S/223772). This LF Mk.IX was shot down by an Fw 190 near Lucheux/ St Pol, France on 11 June 1943. The wreck of EN570 was excavated in recent years and the project was registered as G-CISP by Airframe Assemblies Ltd, Sandown Isle of Wight in July 2015.

One year later the project was sold to Runar Vassbooten/Spit Air AS/Norwegian Flying Aces, Notodden, Norway and registered as LN-AOA on 29 April 2016. The restoration to airworthy condition of this Mk.IX continues in the BBHH. 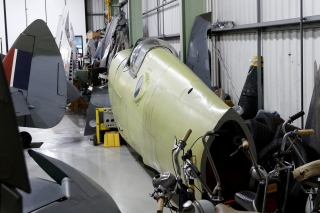 A long term restoration project is G-JNMA, Spitfire FR Mk. XIVe RM927 (construction number 6S/581750) This photo-reconnaissance Spit was delivered to the Belgian AF as SG25. It was flown as such for more than a decade and then ended up in a scrapyard in Ostend, Belgium. In 1967 the plane was transported to the United Kingdom where it was displayed on a roof in RAF colours with code “IQ-W”.

After two years the fuselage was sold to the USA where it had several owners before a restoration was started in 1982, using the wings of an Indian Air Force Mk.XIV. It returned to the UK in 1995 and was bought by Paul M. Andrews in 2005. He registered the project as G-JNMA in March 2009, but it has seen little activities in recent years. 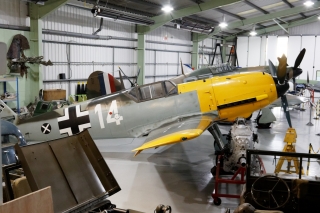 The Biggin Hill Heritage Hangar Ltd. houses a true rare bird, G-CIPB, a Messerschmitt Bf109E-4 with code14 Wh (Werk Nr.3579). The aircraft is a Battle of Britain veteran which was built by the Arado Flugzeugwerke GmbH in 1939. It was restored to flying condition in Colchester UK in the years 1992 to 1998 and then shipped to the USA.

It flew as N81562 for the Museum of Flying in Santa Monica (CA) from 1999 to 2003. It was then acquired by the Ed Russell Aviation Group of Niagara Falls, flying as CF-EML until its sale to the UK in 2014. This ‘Emil’ was registered as G-CIPB in the UK in February 2015 and celebrated its first flight on 6 November 2018. But as far as we know, it did not fly much since then. 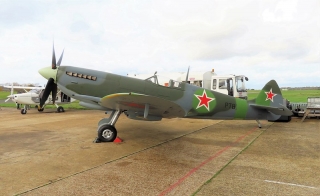 Vickers Supermarine Spitfire PT879, the “Russian Spitfire” is a Mk.IX built under construction number CBAF.IX.2922 in Castle Bromwich in 1944. It is owned by Peter Teichman, of the Hangar 11 collection of North Weald (UK). On 28 October 2020, the fighter, registered as G-PTIX made its first post-restoration flight from Biggin Hill, with well-known warbird pilot Pete Kynsey at the controls.

PT879 was one of the Spitfires that were supplied to the Russian Allies under Lend-Lease during WW II. Unfortunately PT879 collided with another Spitfire and crashed on the Kola Peninsula on 18 May 1945. Recovered from Russia in 1997, the hulk was bought by Angela Soper of Romford (UK) and the project was registered as G-BYDE. The fighter is allegedly now at Biggin Hill to be fitted out with bomb racks. 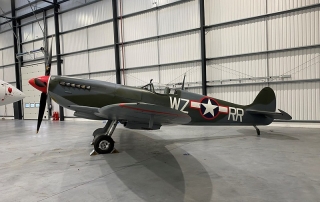 Very few Spitfires carry USAAF livery, but G-PBIX RW382, a Mk.XVIe is one of the few. It was painted in the colours of a Spitfire Mk.IX flown by the 31st FG, 309th FS USAAF in September 2020. The fighter with code “WZ-RR” was flown by Lt. Robert Connor during the Italy campaign in 1943.

The aircraft is a former RAF gate guard which was restored to flying status in 1991 as G-XVIA. It was sold to the USA in 1995 as (not surprisingly) N382RW, but crashed in June 1998, killing its owner. The wreckage was sold to the UK and a restoration with a newly built fuselage commenced in 2001.

As G-PBIX the plane made its first flight on 18 September 2013, adorned with the code “3W-P”. The original “3W-P” was flown by No. 322 (Dutch) squadron RAF from November 1944. There is still some dispute over the true identity of RW382: while most sources mention CBAF.IX4640 as the construction number, the British registry sticks to CBAF.11581, which seems to be the c/n of the firewall of the Spit.