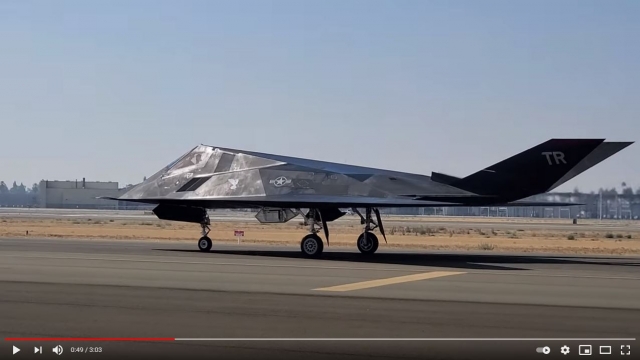 On 14 September 2021, aviation enthusiast at Fresno Yosemite International Airport (CA) were treated on some great aircraft.

Two more aircraft were heard on AAR Boom in Reveille MOA as call Knight 1, tail #828, and Knight 2, tail #824, during the evening hours of 14 September.

It is not known how long the aircraft will stay. It was stated that the aircraft are participating in local training exercises.

The number of operational Nighthawks is a well-kept secret. The aircraft used to be operated by the 49th Fighter Wing and are currently based at Tonopah/Test Range (NV). The current operating unit is not confirmed, but according to the badge this must be the 4550th Fighter Group.

Scramble Magazine published a number of news items on the secretative aircraft. In February 2019, F-117s were seen flying over Death Valley National Park (CA). In April 2019, Scramble reported a massive scoop on Nighthawks participating in Operation Inherent Resolve (OIR), the combined operation to defeat ISIS/Daesh, in and over Iraq and Syria. Earlier this year, in May 2021, Scramble reported on the US Air Force's preperation to do a flyover over the Lockheed Martin's Aeronautics Palmdale plant on 18 June 2021.

Randy Bugni posted a video of the arrival of the Nighthawks on YouTube.