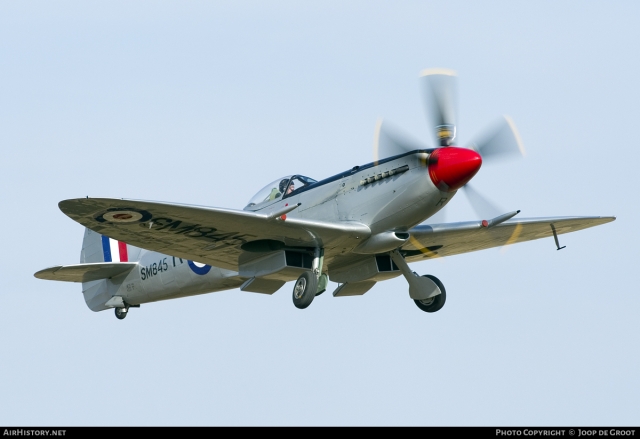 Sold through Platinum Fighters Supermarine Spitfire FR Mk XVIIIe SM845 has found a new owner. The fighter (construction number 6S/672224) with British registration G-BUOS has been acquired by Fliegerhorst GmbH & Co.KG. It was already ferried from the UK to MeierMotors of Bremgarten, Germany by pilot John Romain.

Salvaged and shipped to the USA in 1978, the fighter was later returned to Historic Flying Ltd. in Audley End (UK) for restoration. It flew again as G-BUOS with code “GZ-J” on 7 July 2000.

HFL sold SM485 to the Biltema Group as SE-BIN in 2009, but its ownership was short-lived: It crashed on 21 August 2010. Two years later the wreckage was acquired by Richard Lake and returned to the Sandown, UK for restoration. Again as G-BUOS, SM485, now in silver livery with code “R”, returned to the air on 17 December 2013. Now Richard Lake has succeeded in selling the plane to a, surely proud, new owner.