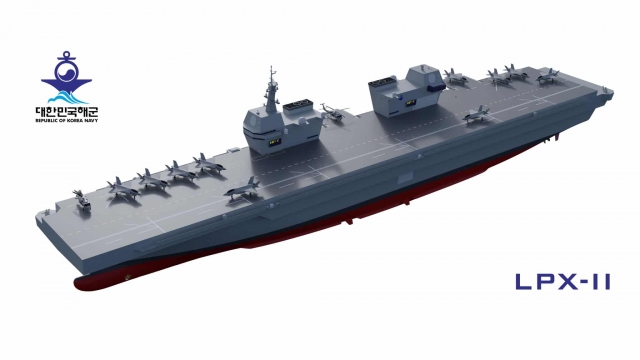 On 30 December 2020, South Korea' showed an artist impression of its finalized plans for the LPX-II light aircraft carrier. The defense budget for the LPX-II was officially allocated in the 2020~2024 Mid-Term Defense Plan as local media JoongAng Ilbo reported.

After about a year of preliminary planning and debate, the light aircraft carrier programme is officially underway and the ship is expected to be delivered to the Republic of Korea Navy (ROKN) in 2030.

The LPX-II, a project assigned to the South Korean shipyard Hyundai Heavy Industries (HHI), will not be equipped with a ski-jump and features a twin-island concept. The first is USA influence while the second is UK influence. Both countries are close allies for the ROKN in the development of the LPX-II. The twin-island concept is seen with the Royal Navy aircraft carrier Queen Elizabeth, while the lack of a ski-jump is known of US carriers.

The ROKN will not use the LPX-II for amphibious operations, as their initial project LPX-I was intended for. LPX-II is displacing some 40,000 tons.

LPX-II will be equipped with some twenty F-35B Lightning IIs as well as Seahawks and attack helicopters that will be deployed from the South Korean Marine Corps. There is an upcoming competition Korean Aerospace Indusries with the Surion MAH, Bell Helicopters with the AH-1Z and Boeing with the AH-64 Apache that will lead to the attack helicopter that will be used by the South Korean Marine Corps.