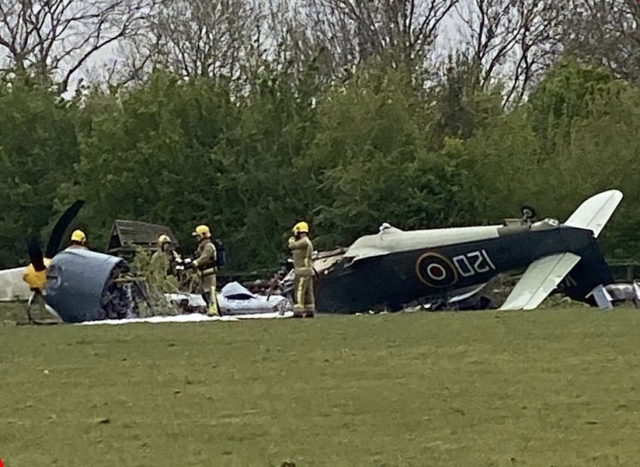 According to the British Navy Wings organisation, their Hawker Sea Fury T.20 G-RNHF (VX281) made a precautionary forced landing on 28 April.

The trainer (c/n ES3615) came down in a field next to RNAS Yeovilton following a problem with the engine on a routine training flight this afternoon.

Both pilots are safe and well and have been taken to Yeovil District Hospital for a precautionary check-up. The cause is under investigation and both the CAA and Air Accident Investigation Branch have been informed. No further information is available at this time.

During the forced landing, the engine separated from the fuselage and the Sea Fury came to rest in an upside down position.

Sea Fury T.20 G-RNHF (VX281) was the second of 60 Sea Fury T.20 aircraft built as weapon trainers for the Fleet Air Arm. Delivered to the Royal Navy in 1950 she served with 736 and 738 Naval Air Squadrons at Royal Naval Air Station (RNAS) Culdrose before being sold to the West German Government in 1963.

Painted in the markings of an F10 single-seat aircraft of 799 Naval Air Squadron based at RNAS Yeovilton in 1949, VX281 was acquired by the charity from the United States (as N281L) in 2007 and rebuilt at North Weald. 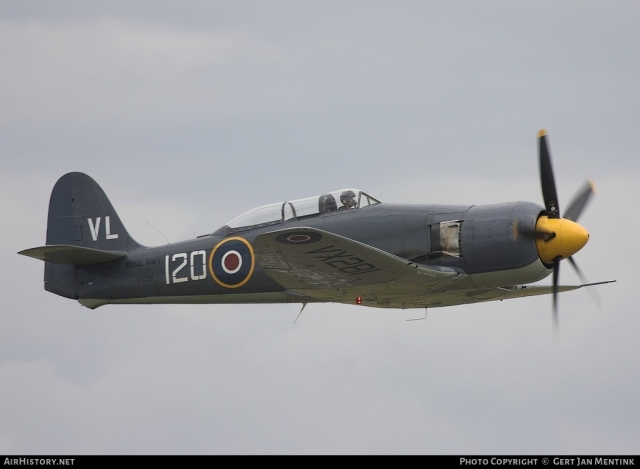 It is not the first accident in which VX281 was involved. In 2014 the aircraft suffered an engine failure during a display manoeuvre at RNAS Culdrose Air Day. She returned to flight following the charity’s successful £200,000 appeal to buy a new Centaurus 18 engine.

Until 2018 she was loaned to the Royal Navy Historic Flight (RNHF) under a Memorandum of Understanding between the charity and Navy Command. With the demise of the RNHF in March 2019, she is now operated directly by Navy Wings.