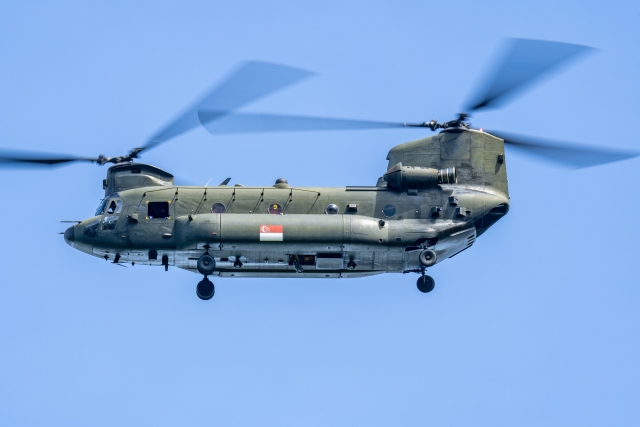 RSAF CH-47SD Chinook will be retained

The Republic of Singapore Air Force (RSAF) will only retire its Boeing CH-47D Chinook heavy-lift helicopters as it continues to take deliveries of new CH-47Fs from the US. The retirement of the older model suggest that the service will retain the CH-47SD helicopters to serve alongside the CH-47Fs, increasing its fleet of Chinooks to 26.

In 2015, Singapore announced it had ordered the CH-47F to replace its older Chinooks under a Direct Commercial Sale contract with Boeing. Although the Singapore government did not disclose the number of helicopters ordered, the FAA Registry showed sixteen CH-47Fs with their temporary registrations, N271GG until N286GG (construction numbers M2071 until M2086).

The ten CH-47SD Chinooks were acquired in 1998 and they are equipped with digital engine controls and glass cockpits. They were also fitted with fuel tanks larger than comes standard. The CH-47SD serves with 127 Squadron at Sembawang Air Base.

The older CH-47Ds are the survivors of six helicopters acquired by the RSAF in 1994. These were assigned to the Peace Prairie detachment at Grand Prairie (TX), with the state’s National Guard before they were moved to the the Army Aviation Training Centre at Oakey in Queensland, Australia, in 2018. In August 2020, the Australian Ministry of Defence (MoD) confirmed that the RSAF will increase the number of CH-47F Chinooks based at Oakey to ten.