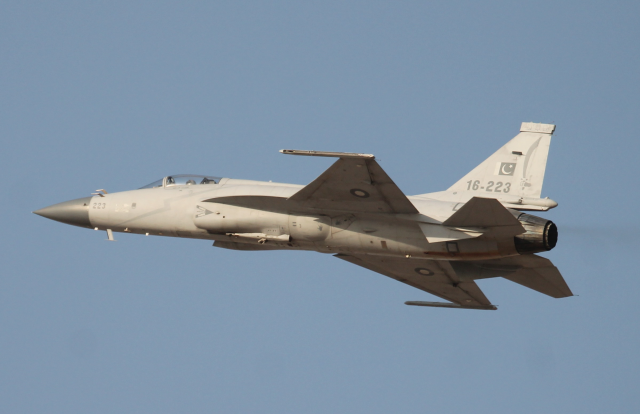 The Pakistan Fiza'ya (Pakistan Air Force) is in the process of reshuffling some of its assets.

The influx of more JF-17 Thunder fighter aircraft means they can be distributed throughout the country. The Tail Choppers from 14(AS) Squadron moved with their JF-17s to Rafiqui AB, a Mirage air base.

The squadron used to be based at it's birth ground Minhas AB, where 16(MR) Squadron Black Panthers still operates the type and where the PAC Kamra (Pakistan Aeronautical Complex) facility is also situated.

No. 2(MR) Squadron Minhasians moved with their JF-17s from Masroor AB, a Mirage base West of Karachi, to Jacobabad AB, an F-16 Fighting Falcon base. With the influx of the JF-17B two seater, 16(MR) Squadron is the first recipient of those duals.

Also 18(OCU) Squadron Sharp Shooters is earmarked to transition to JF-17B as well, shedding their legacy F-7P/FT-7 aircraft. Allegedly, they will then move to Minhas AB when they will be equipped with their new mounts.

The current distribution of the Thunder is as follows:

Detailed information on Pakistan's Air Order of Battle can be found here. If you have new information, please use the updates form at the bottom of the OrBat page.