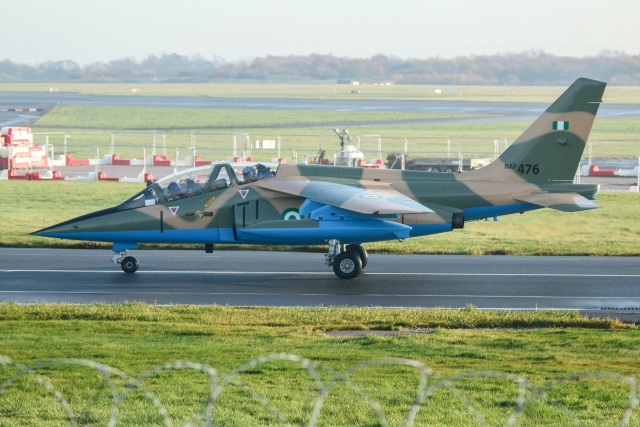 Boko Haram terrorists in Nigeria claimed responsibility for bringing down a Nigerian Air Force (NAF) Alpha Jet on 31 March 2021. The aircraft, with two pilots on board, came down near Abba-Jille in Konduga LGA, Borno State. The fate of the pilots is not reported yet, the Alpha Jet involved is NAF475, msn 0042.

However, the NAF command later dismissed claims by the terror group of shooting down the jet, which disappeared from radar while on an operational mission to Maiduguri. Boko Haram had through a viral video clip claimed responsibility for downing the aircraft. While NAF commands reports the aircraft had technical issues and exploded in the air. The exact cause should be determined.

The Director of Public Relations and Information of the NAF dismissed the claim, saying that the viral video could be clips from a previous incident. He pointed out that the video was fraught with inconsistencies that established it was fake, adding that the lush vegetation in one of the videos suggests it was not in the northeast.

There is no unit known for this Alpha Jet. The NAF has two units operating them; 909 Tactical Fighter Training Wing based at Lagos-Murtala Muhammed and 206 Wing based at Port Harcourt.

That last unit is part of the 97 Special Operations Group, so given the mission it could well be part of 206 Wing.