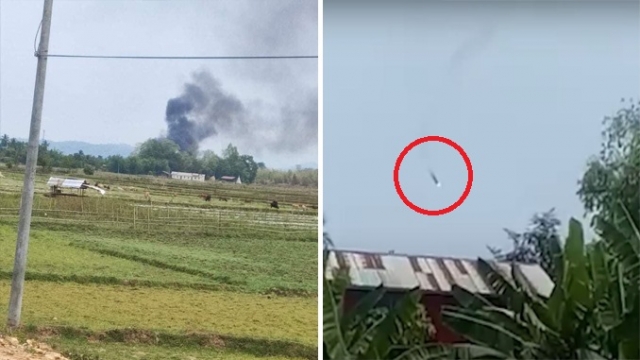 On Monday 3 May 2021 at 10:20 hrs LT, a rebel group in Myanmar's mountainous north claimed to have shot down a military helicopter with a Man-Portable Air-Defense System (MANPADS). No information was given on the type of helicopter, but reports suggest this a Mil Mi-35P attack helicopter was involved.

The rebel group, the Kachin Independence Army (KIA) said it had shot down a military helicopter near the town of Moemauk in Kachin province after days of military air raids. A small video was shown on twitter, but the type of helicopter could not been confirmed from this footage.

The Myanmar Defence Force has fifteen Mi-35P attack helicopters in its inventory of which one is reported crashed in January 2013. The main operating base is Meiktila AB (Central Sector Operations Center - SOC), but the unit has detachments at Lashio (South Eastern SOC) and Naypyitaw/Intl (Central SOC). We think the Myanmar Defence Force also has a detachment at Nampong air base near Myitkyina in the state of Kachin.