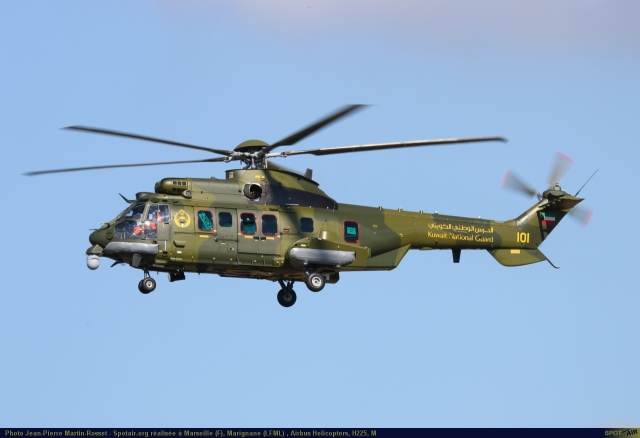 An interesting new Kuwaiti helicopter emerged from the Airbus facilities at Marseille/Marignane (France).

It is the first Airbus H225M, formerly known as Eurocopter EC725 Caracal, for the Kuwait National Guard.

In June 2015, Kuwait was negotiating to acquire up to 24 EC725s Caracals for the Kuwait Air Force (KAF). Eventually the Kuwait Ministry of Defence and Airbus Helicopters signed a USD 1 billion plus contract for 30 H225Ms in August 2016.

The KAF H225M flight test programme started on 17 October 2019. The first two helicopters commenced their ferry flights to Kuwait in the first weeks of February 2020. Subsequently, on 19 February 2020, it was announced that the Kuwait Ministry of Defence suspended accepting further H225M deliveries after the first two were delivered with unspecified engine problems. After some uproar by local members of Parliament, a special committee stood up to investigate the issue.

It seems that the higher serial numbers in the KAF H225M overview are a slightly different sub-variant. On both sides of the forward fuselage an extra pontoon can be found, most likely for fuel. Also the sliding doors have one instead of two windows. H225M with serial 620 is also missing the Forward Looking Infra Red (FLIR) turret under the nose section. 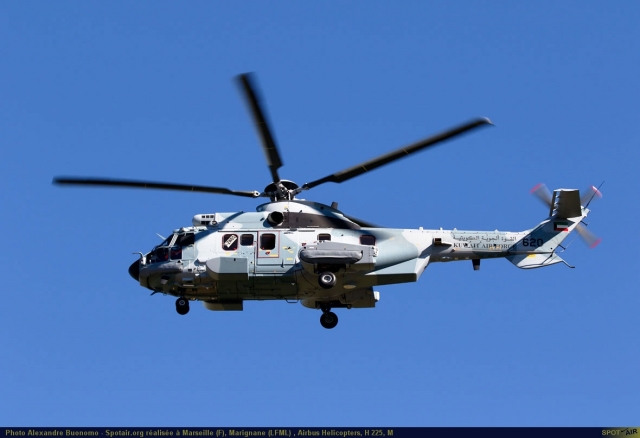 In addition to the air force and national guard helicopters, an Airbus H225M with test registration F-ZWCW and custumer code KWN001, was seen during a test flight in primer at Marseille/Marignane on 8 May 2020. This one is reported as destined for the Kuwait Navy, but how this H225M fits in the above given serials is not yet clear to us.

The sub-variant for the navy has a different nose section, a larger radar in front of the nose wheel and a different sensor turret instead of a weather radar fitted. On the left side of the fuselage a provision for what looks like an external weapons stub is added.