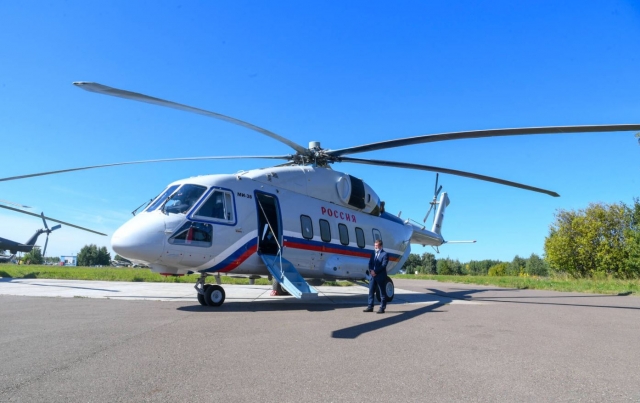 In 2019, the Administrative Department of the President of the Russian Federation signed a contract for the supply of two Mi-38 helicopters for the SLO Rossiya *) with the delivery scheduled for 2020. On 4 September 2020, the first series Mi-38 built under this contract was presented at the PJSC Kazan Helicopter Plant (KHZ) to the President of the Republic of Tatarstan R.N. Minnikhanov and the Head of Russian EMERCOM **), Colonel-General E.N. Zinichev.

The demonstrated helicopter, registration RA-14340 (factory number 26004, serial 01-04), is of the Mi-38-4 type, equipped with a standard passenger cabin and respresents the second civilian Mi-38 helicopter in overall. The first one, a Mi-38-2 luxury VIP version, built in 2019, was handed over to Gazprombank Leasing in February 2020 (registration RA-14341, former 265 White, factory number 26005, serial 01-05) and is being operated in the colours of RVS (Russian Helicopter Systems).

In July 2017, the Russian Ministry of Defence signed a contract with JSC Russian Helicopters for the supply of an experimental batch of two military-grade Mi-38T transport helicopters for joint flight tests and acceptance trials for the Russian Federation - Aerospace Forces (RF VKS). Two helicopters, serial 38015/71 Yellow (factory number 26001, serial 01-01) and serial RF-04529/72 Red (factory number 26002, serial 01-02) were manufactured in 2018-19 at the Kazan plant. The third Mi-38T has been photographed in flight at the Chkalovsky airfield near Moscow, painted overall grey, serial RF-19097/73 Red (factory number 26003 and serial 01-03), on 31 July 2020. The Kazan Helicopters enterprise has firm orders for 21 Mi-38s for 2019-2021, half of them coming from government agencies. At the Army-2020 International Military-Technical Forum in August 2020, the Russian Ministry of Defence signed a contract with Russian Helicopters for two more Mi-38 helicopters, this time with a VIP cabin. It is quite likely that this small order shall cover the already mentioned experimental birds marked 71 and 72 Yellow which shall be accepted into service once the testing programme has been completed. 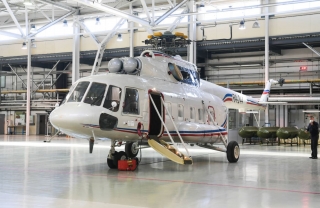 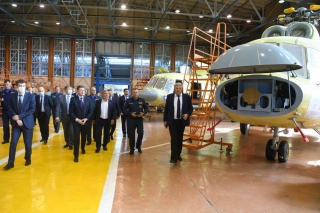 Photos: via president.tatarstan.ru and Maxim Stankevich (via Airliners.net)