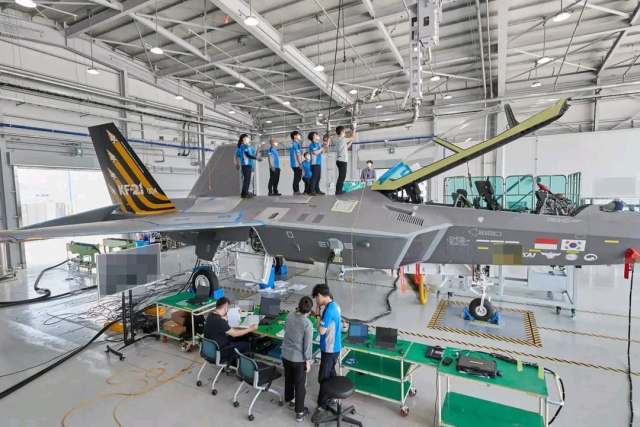 Korean Aerospace Industries (KAI) KF-21 Boramae (Hawk) number 004 is the first two-seat version of the 4.5-gen jet. The KF-21 is formerly known as the Korean Fighter eXperimental (KF-X) and the platform could be used for further development and conversion into a 5th-gen one with improved stealth technologies.

So far none of the KF-21 versions has started flight tests, but the first test flights are anticipated this year. Full scale manufacturing is scheduled to begin in 2026. South Korea expects to deploy 40 jets by 2028 and 120 by 2032.

With the Dae Han Min Guk Gong Gun (RoKAF, Republic of Korea Air Force), the new fighter will replace the ageing fleet of F-4E Phantom II and F-5E/F Tiger II aircraft. It is not known yet how many two-seat KF-21 Boramae (of the 160 aircraft) the RoKAF intends to order.

As you can see on the photo, KF-21 004 is also adorned with the Indonesian flag next to the South Korean flag. On 9 April 2021, Scramble Magazine reported on the official presentation of the new fighter at the company's facility in Sacheon.