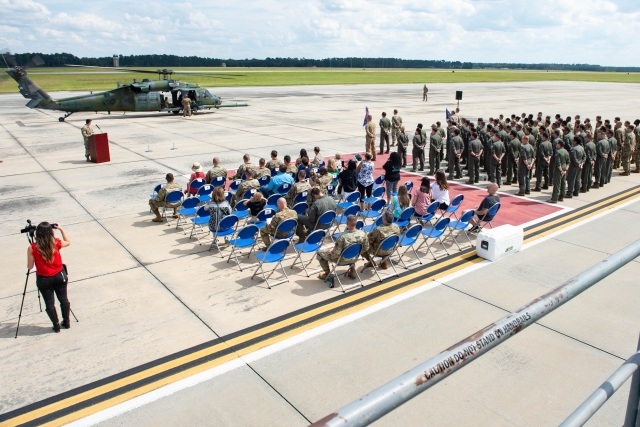 In November 2020, Scramble Magazine wrote about the first HH-60Ws for the 41st RQS. In May 2021, Scramble Magazine also reported that several Pave Hawks were earmarked to be preserved. A misinterpretation was that 91-26356 was already preserved at Moody AFB (GA). That later turned out not to be the case.

On 29 September 2021, the 41st RQS officially retired its last HH-60G Pave Hawk helicopter. On that day, HH-60G with serial number 91-26356, conducted its final sortie at Moody. During a ceremony celebrating nearly 30 years of service, tail No. 356 departed on a flight marking the end of an era for the 'Golf' model aircraft as Moody’s rescue community makes its transition to the HH-60W Jolly Green II.

356 is a veteran of Iraq, Afghanistan, counterterrorism operations in the Horn of Africa, and countless search and rescue operations in the US and around the world. This Pave Hawk was originally delivered to the 41st RQS on 16 September 1994. According to maintenance records, 356 logged more than 8,000 flight hours and received the 2012 Mackay Trophy for its contribution in the 'Pedro 83' flight, where the helicopter joined a formation of other HH-60G Pave Hawks launched in response to an urgent medical evacuation near Mazar-i-Sharif (Afghanistan).

Eventually, 356 will be preserved at the George W. Bush Airpark at Moody. Bush, a former US president, started his flight training at Moody in 1968. After that he was commissioned into Texas Air National Guard's 147th Reconnaissance Wing flying the Convair F-102 Delta Dagger.