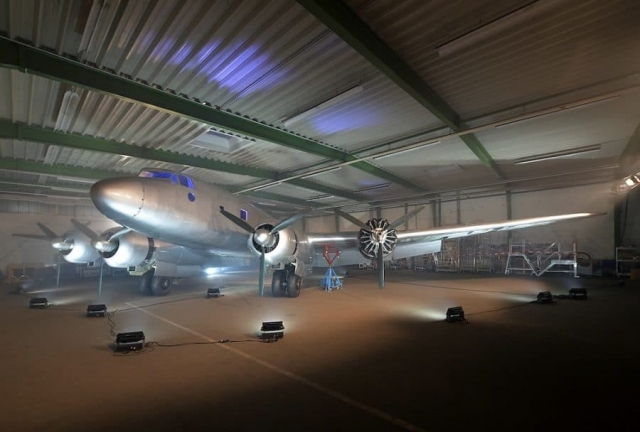 The recently completed restoration of a unique Focke-Wulf Fw 200 four-engined airliner will be the centerpiece of a new aviation museum at Berlin’s former airport Tempelhof.

On historic grounds, known for its role during the Berlin Airlift, a collection of historic aircraft will be displayed, including a Douglas C-54 and an Ilyushin Il-14P. The Fw 200 arrived there, partially dismantled, by flatbed trucks late June.

The Condor, the prototype of which made its first flight in 1937, was a promise for future long distance air travel. It was able to carry 25 passengers over a distance of 1500 kms.

One of the prototypes made a number of record breaking flights, like a 25 hours non-stop flight from Berlin to New York. Small numbers were bought by Deutsche Lufthansa, Danish Airlines and Syndicato Condor, a Brazilian subsidiary of Lufthansa. Because of its impressive range, the German Luftwaffe soon became interested in the Fw200 as a potential bomber and transport.

In total 276 Condors were built. Most of these were built in the military versions which in the beginning of WW II served as long-range reconnaissance bombers. 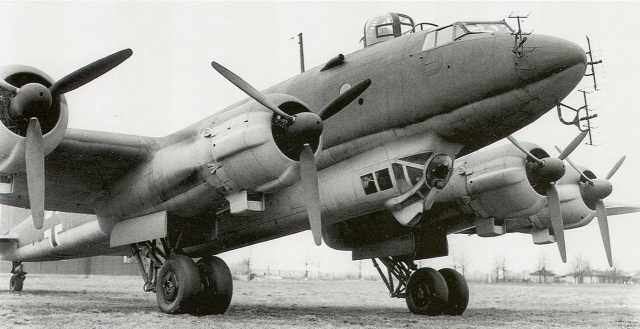 Operating out of occupied France and Norway, the Condors became a menace to Allied convoys on the North Atlantic.

Initially they saw limited use as transports (e.g. flying supplies into Stalingrad) but after 1943 the Fw 200’s use was restricted to transport. Even Adolf Hitler used a Fw 200 Condor as his personal transport.

For decades the type was considered to be extinct, but after a restoration that took 22 years of blood, sweat and tears, the world’s only example was completed early this year.

The nucleus of the restoration was Luftwaffe Fw 200C-4 F8+BR (Werknr. 0063), which was salvaged form a Norwegian fjord where it had ditched on 22 February 1942.

After 57 years of being submersed, the Condor was recovered in 1999. But unfortunately the fuselage broke during the recovery procedure.

And so, in stead of restoring, the main fuselage had to be completely rebuilt, during which the lack of construction drawings was an additional problem. 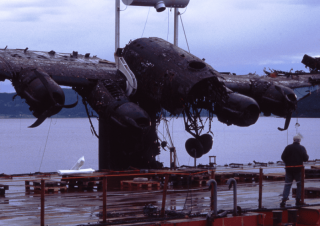 The wreck of a second Condor, F8+AK (Werknr. 0140) became the donor of the port wing and several smaller parts for the restoration project. This F8+AK had crashed on Kvitasoni Mountain in Norway on 27 December 1942.

And although the salvaged Condor was a military example, the project was finished (maybe for political reasons?) as a civilian Fw 200 airliner.

The restoration/rebuilding would not have been possible without the support of a number of German aviation companies like Airbus Operations GmbH, Rolls-Royce Deutschland, and the Lufthansa-Berlin-Stiftung.

The actual restoring was done by some 150 volunteers with an aviation background, many of them in their eighties! They were led by a team of the Technik Museum Berlin.

The main sites of restoration were Bremen (fuselage and wings), Hamburg (tail and undercarriage) and Oberursel (engines).

After their restoration, the various components were collected in Bremen and assembled in an exhibition hall in Bremen-Stuhrbaum into a complete Fw-200.

Before its move from Bremen to Berlin the Condor had to be dissembled again and in several trips the components were trucked to Tempelhof. 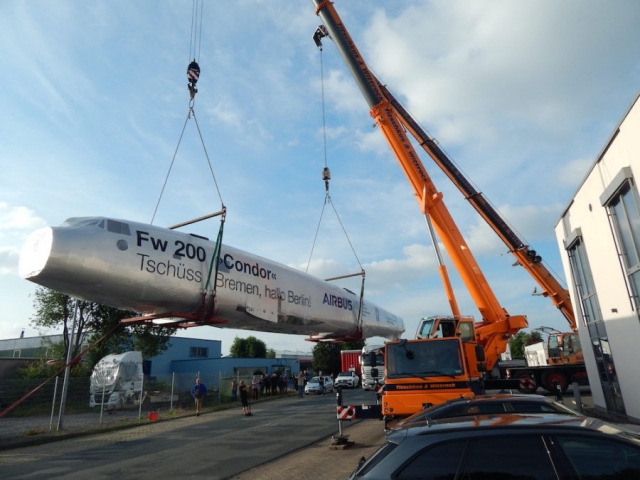 The final component was the fuselage which was transported to Berlin on an extra long vehicle trailer on 22 to 24 June. By the time you read this, the Condor must have been assembled again, ready to go on display in Hangar 7!

The Deutsche Technik Museum Berlin plans to start guided tours as soon as it is possible. In the future the new exhibition could also become the final resting place for Lufthansa-Berlin-Stiftung’s Junkers Ju-52.

Photos by Airbus and Jan Frieben