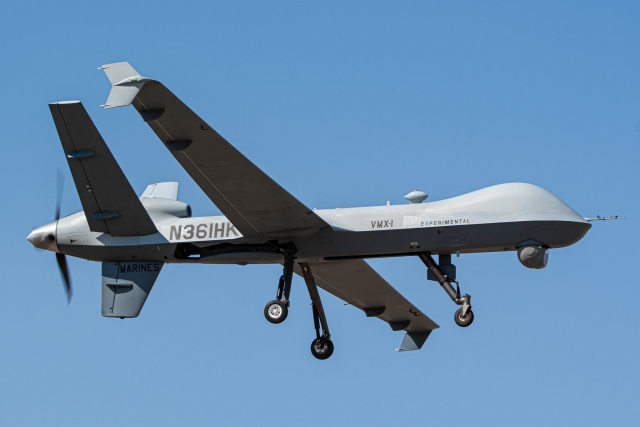 On 20 September 2021, the first General Atomics MQ-9A Reaper for the US Marine Corps (USMC) was photographed at El Mirage Field-Adelanto (CA).

Scramble Magazine reported in April 2021 on the two contracts awarded to General Atomics Aeronautical Systems Inc. (GA-ASI) for the delivery of four MQ-9As. Both contracts were awarded by Naval Air Systems Command (NAVAIR).

Before being operated by Marine Unmanned Aerial Vehicle Squadron (VMU) 1 Watchdogs, the aircraft will be delivered to Marine Operational Test and Evaluation Squadron (VMX) 1, most probably at MCAS Yuma (AZ).

The USMC force design plan 2030 show the force will get three new unmanned squadrons in the next ten years. These squadrons will be added to the current Unmanned Aerial System (UAS) tactical platforms which are not able to operate with lethal weapons. Currently the USMC primarily operates the small RQ-21 Blackjack that is primarily focused on intelligence gathering.