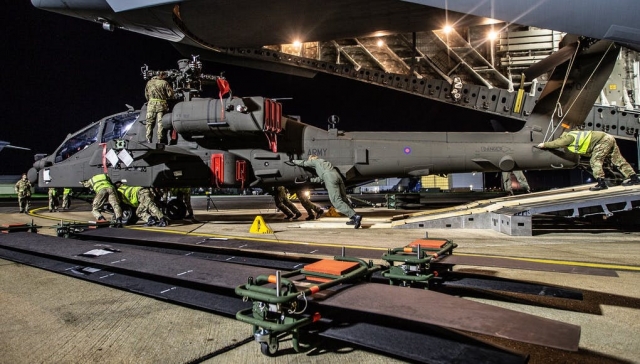 In the early hours of 24 November 2020, the first two Boeing AH-64E Apache Guardians arrived on board a Royal Air Force C-17A Globemaster III at RAF Brize Norton. The Apache Guardians, serials ZM704 and ZM705, are the first of two of fifty new AH-64E attack helicopters.

In August 2015, the US Defense Security Cooperation Agency (DSCA) approved the upgrade of fifty of the UK’s WAH-64 fleet to AH-64E Apache Guardian standard. One year later, in July 2016, the UK Ministry of Defence placed an order for fifty AH-64Es through the US Foreign Military Sales (FMS) programme instead of upgrading their Westland-built WAH-64s.

The two new Apaches arrived at Wattisham on 26 November 2020. The first UK flying is anticipated to commence in July 2021. Initially, the focus will be on trials activity and then on developing instructional techniques to safely manage aircrew transition from Mark One to E-model (Apache AH1 to Apache AH2).

After that, the focus will change to the full rate conversion training of 3 Regiment Army Air Corps (3Reg AAC). Prior to commencement of flying, the full Air System Safety Case will be rigorously tested to ensure it can support safe flying. This will include Quality Assurance and airworthiness tasks by the 7 Bn (Battalion), plus certification by the UK Military Aviation Authority, assurance of aircraft documentation, simulators, training and instructors.

Next to that, the Royal Electrical and Mechanical Engineers (16 Air Assault Brigade) with the 7 Aviation Support Battalion also known as 7th REME is based at Wattisham.