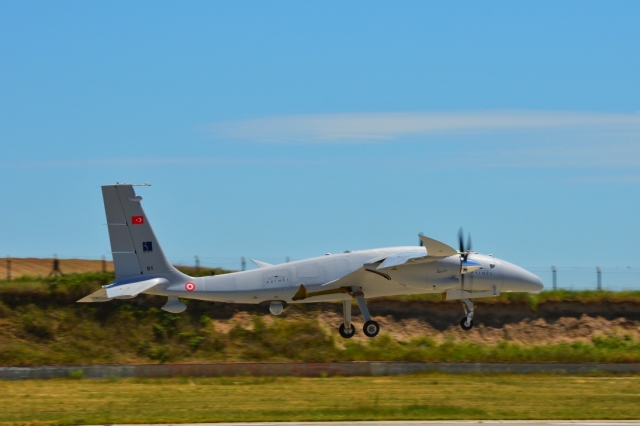 The Baykar Akıncı is a 4.5 ton TİHA (Taarruzi İnsansız Hava Aracı - Assault UAS), capable of deploying a considerable payload (900kg external and 450kg internal). The Akıncı can also be equipped with an electronic support pod, air-to-air radars, satellite communication systems, barrier-identification radar, synthetic aperture radar and meteorological radar which are all designed and developed in Turkey. The platform will operate with various ammunition configurations.

Besides S-1, S-2 to S-4 were seen on the production line and are expected to fly soon. It is not yet clear when the Türk Kara Havacilik Komutanlığı (Turkish Army Aviation Command) will receive the Akıncı. The 3ncu Ordu Silahlı İnsansız Hava Araçları Tabur Komutanlığı (3rd Armed Unmanned Aerial Vehicles Army Battalion Command) at Batman air base is expected to be the first unit to receive the HALE-UCAS. The unit already operates the Bayraktar TB2S.

Other Turkish drones
At an unprecedented speed, the Turkish Defense Industry is developing and producing Unmanned Combat Aerial Systems (UCAS) like the Baykar Savunma Bayraktar TB2S, that is highly combat proven in Syria, Libya and played a key role in the 2020 Karabakh war (*) where Azerbaijan, with the help of Turkey, deployed the Bayraktar TB2 SIHA (Silahlı İnsansız Hava Araçları - Armed Unmanned Aerial System). This UCAS proved pivotal in this conflict and it showed the maturity and effectiveness of the Turkish drone-manufacturing machine.

Another indigenously developed MALE-UCAS, the Turkish Aerospace Industries (TAI) Aksungur (Gyrfalcon) made its first flight on 20 March 2019 and a second prototype flew for the first time during 2020:

With respect to the Bayraktar TB2S, to date at least 200 have been produced. The drone is currently improved with satellite communication capabilities and the follow-up Bayraktar TB3 is under prototyping currently and is expected to be released later this year.

*) The 2020 Nagorno-Karabakh war was an armed conflict between Azerbaijan, supported by Turkey, and the self-proclaimed Republic of Artsakh together with Armenia, in the disputed region of Nagorno-Karabakh and surrounding territories.