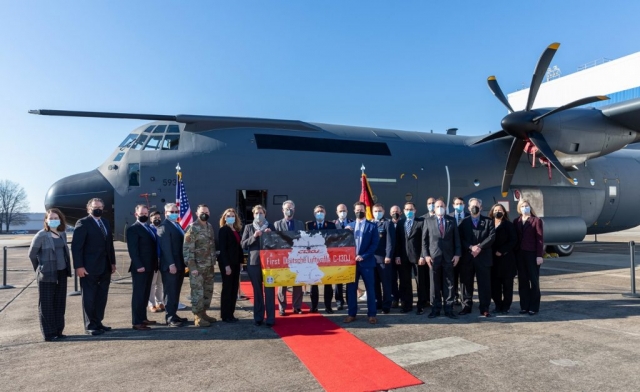 On Saturday 19 February 2022, the first Luftwaffe (GAF, German Air Force) Lockheed Martin C-130J-30 Super Hercules arrived at Base Aérienne 105 (BA105) Evreux/Fauville (France) with call sign RCH221. The markings on the aircraft such as the operator, the flag and the well-known cross in the serial were taped off.

Due to bad weather over the Atlantic the Hercules stayed at Bangor until 18 February. From there it flew to Rota (Spain) and on Saturday 19 February it continued to Evreux/Fauville.

The GAF C-130J-30 is the first of six German aircraft, three C-130J-30s and three KC-130Js, to be delivered to the new Franco-German Super Hercules squadron. The other five are expected to be delivered between now and 2023 in order to achieve full squadron capacity by 2024.

According to the information, the GAF C-130J-30 will officially be accepted on 22 February 2022. It is not known if the number and name of the new squadron will also be revealed.