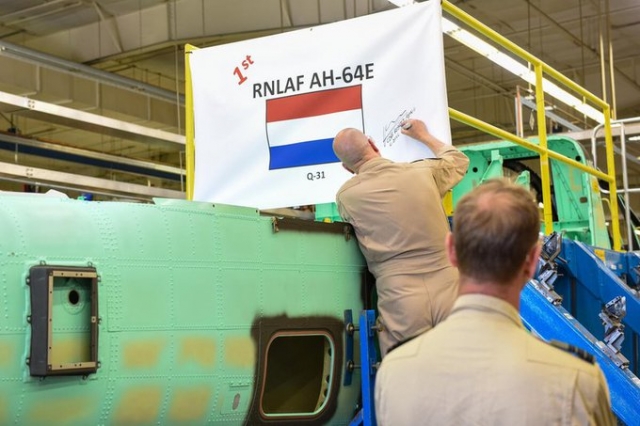 In the December 2020 Defence review of the Dutch Ministry of Defence (MoD), it was reported that 28 Koninklijke Luchtmacht (KLu, Royal Netherlands Air Force) Boeing AH-64D Apache helicopters will be modernised to the latest AH-64E Apache Guardian Block II variant.

Since then a large number of Apache helicopters have been shipped from 301 Squadron at Gilze-Rijen air base to the USA for this modernisation program. Currently a small number of AH-64Ds are still active at Gilze-Rijen.

In May 2022, the first AH-64E Apache Guardian fuselage, serial Q-31, was noted on the assembly-line at Boeing’s AH-64 manufacturing plant in Mesa (AZ). Despite using the “old” AH-64D fuselage, the helicopters will be almost complete new airframes and will therefor receive new serials.

The “new” helicopter will be equipped with the latest state-of–the-art equipment like a new Integrated Self Protection System (ISPS), a new radar, Radar Warning Recievers (RWR), Laser Warning Recievers (LWR), a complete new software system and new Laser-guided – and Hellfire missiles. The modernisation programme is expected to be completed by the end of 2025.