The first KC-46A for the Japan Air Self-Defense Force (JASDF) arrived at Yonago-Miho Air Base on 29 October 2021.

The Japanese roundel was taped over and the tanker had the Foreign Military Sale (FMS) serial stickered on the vertical stabiliser; 21-46401. The future serial of the aircraft is 14-3611.

The Pegasus was flown non-stop from Seattle-Boeing Field (WA) to its new base where it will be operated by 405 Hikotai under 3 Yuso Kokutai, joining co-based C-2 transport unit 403 Hikotai.

For the moment it is unknown if the aircraft will be tested by the Gifu test unit Hiko Kaihatsu Jikkendan, as was the case with the induction of the KC-767.

Japan selected the KC-46A in October 2015 and for the moment procured four of the type, with reports claiming it will seek a total of six aircraft. The second KC-46A, 14-3612 recently conducted its first engine runs at Everett (WA).

In related news, 41 Kyoiku Hikotai, the former Miho based T-400 training unit officially came under control of 1 Kokudan at Hamamatsu on 29 October. By 28 October all thirteen T-400s had arrived at Hamamatsu, serial 41-5055 was the last to arrive from Miho. 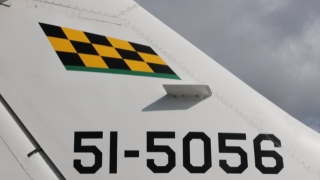 Taking into account the Japanese efficiency, all T-400s will have received the new black/yellow checkers badge with the green line by now. The unit had to vacate Miho in order to make room for the arrival of the KC-46As. At Hamamatsu it has taken up residence in the hangar and on the apron west of the local T-4 units.

Photo by Nick Dean via Planespotters.net