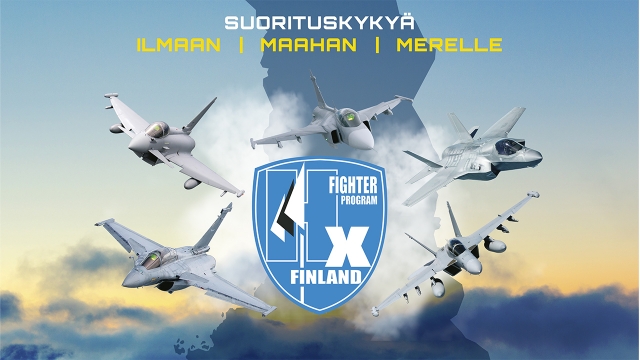 By 30 April 2021, the Finnish Defence Forces Logistics Command received the Best and Final Offers (BAFO) for the HX Fighter Replacement Programme (HX-FRP, stands for Hornet replacement with candidate X aircraft) from the five fighter manufacturers. The programme outlines were communicated in January 2018.

Next, the quotations will be evaluated in line with the invitation for tenders and the programme’s decision model to make a procurement proposal. After the evaluation of quotations is completed in autumn 2021, the Finnish Government will decide on the procurement, on proposal by the Ministry of Defence, at the end of 2021.

Only two particpants have made an offer where they outline the exact type and number of aircraft involved. Boeing was the first participant to do so. Boeing’s offer includes 64 fighters, 50 of which are single-seat F/A-18E Super Hornets and 14 EA-18G Growlers designed for electronic warfare.

The offer from Saab Aerospace contains 64 single seat Saab 39E Gripen fighter aircraft and two Bombardier Global 6000 GlobalEye multi-domain airborne early warning and control (AEW&C) platforms, in addition to an undefined quantity of missile systems in the weapons package. In the reported production schedule the 64 Saab JAS39E Gripens delivered from 2025-2030, although no details were given on the annual breakdown. Initial Operating Capability (IOC) would be required to be reached by 2027. Projected delivery dates for the two GlobalEyes are 2026 and 2027.

Lockheed Martin, Dassault and the Eurofighter consortium have not indicated the number of fighters in their BAFOs.

On 26 February 2020, the HX-FRP finished the HX Challenge phase. This phase started on 9 January 2020, when the first manufacturer arrived at the Finnish air base Tampere/Pirkkala.