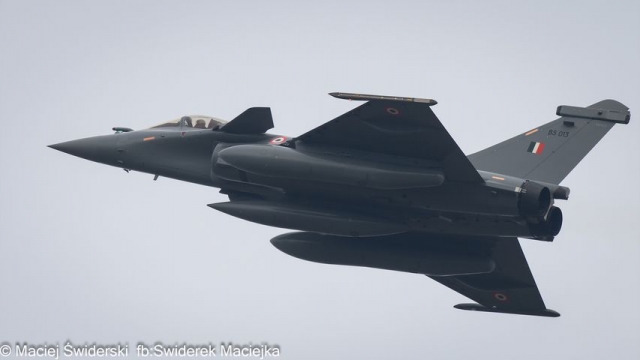 It was the intention to deliver four Rafales, three single seat Rafale EHs (serials BS012, BS013 and BS014) and one dual seat Rafale DH (serial RB002), but the dual seat was towed into the Dassault hangars at Bordeaux/Merignac (France) reported to have some technical issues. The IAF published a video on her Facebook page showing the departure of three Rafale EHs.

According to the IAF, the aircraft flew a distance of almost 8,000 km with air-to-air refuelling support from the Armée de l'Air et de l'Espace (FASF, French Air and Space Force) and the United Arab Emirates Air Force (UAEAF).

Earlier on the day, the Rafales were flagged off from Merignac air base (France) by Chief of Air Staff Air Chief Marshal RKS Bhadauria, who is on a five-day visit to France. The IAF chief also visited a Rafale aircraft training centre on the third day of his visit. In his brief remarks, Air Chief Marshal Bhadauria said some of the Rafale aircraft have been delivered a "little bit" ahead of time and this has contributed to the overall combat potential of the IAF.

The arrival of the new batch of the aircraft will pave the way for the IAF to raise a second squadron of eighteen Rafales. The new squadron, 101 Squadron Falcons will be based at Jalpaguiri/Hashimara Air Force Station in West Bengal. The first Rafale squadron, 17 Squadron Golden Arrows, is based at the Ambala AFS (state of Haryana).

On Tuesday 20 April 2021, Air Chief Marshal Bhadauria held talks with General Philippe Lavigne, Chief of Staff of the FASF, on ways to further expand cooperation between the two sides.