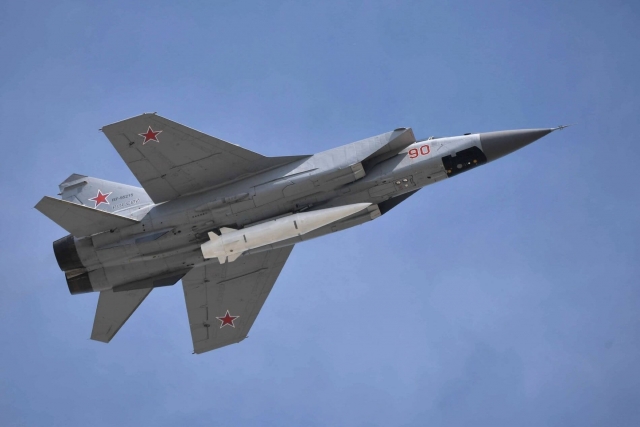 Exercises in the Mediterranean with MiG-31K

The Department of Information and Mass Communications of the Ministry of Defence of the Russian Federation has provided more details about the recent deployment of the MiG-31K Foxhound to Syria.

The pair of MiG-31Ks was flown to the Khmeimim Air Base (Syria) to complement the three Tu-22M3 Backfire long range bombers having been deployed there on 21 Jun 2021. The Foxhounds came in to test their primary weapon, the aeroballistic missile of the Kinzhal (Dagger) hypersonic missile system, but also to gain practical skills in this specific geographic area and climatic conditions. Part of the training drill included combat missions to ensure the security of the Khmeimim Air Base and the Tartus logistics centre of the Russian Navy, together with Sukhoi Su-35S multirole fighters with RVV-SD (Izd.170-1) and RVV-MD (Izd.740) air-to-air missiles.

As Scramble Magazine reported on 25 June 2021 about Russia's new strategic messaging, the exercise also includes Tu-142MK and Il-38 ASW aircraft flown in from Russian airfields, as well as five ships of the Russian Navy. The deployment of the Backfires and Foxhounds at Khmeimim has only become possible recently as a result of lengthening and reconstruction of the base’s second runway.

The noted MiG-31Ks, Bort Number 90 Red/RF-95215 and 96 Red/RF-92451. are both operated by the 929.GLITs, the Chaklov State Flight Test Centre. This unit is a well-known Russian government establishment for flight testing of military aircraft based at the Akhtubinsk air base in the Astrakhan region, which carries out experimental combat duties of the new types and established and develops their combat doctrine and tactics.