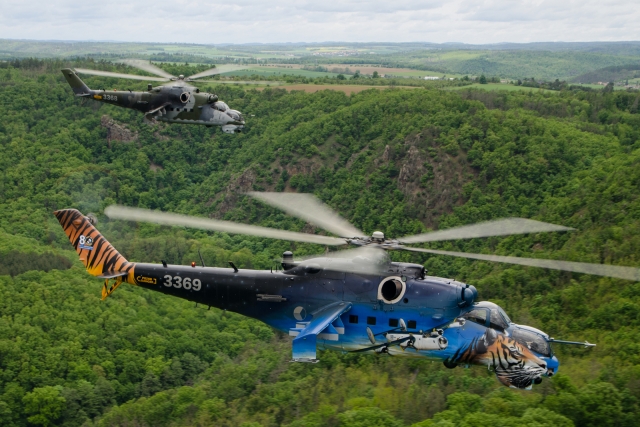 The Vzdušné síly armády České republiky (CzAF, Czech Air Force) has painted a Mi-35, serial 3369, in a special livery. The livery refers to the Námest Nad Oslavou helicopter base which is the bearer of the traditions of the 311th Czechoslovak Bomber Squadron of the RAF.

Last year was the 80th anniversary of this only Czechoslovak bomber squadron within the RAF which was formed on 29 July 1940. In the early days of the war, 311 Squadron flew the Vickers Wellington for Bomber Command during night bombing raids on Germany. In April 1942 the squadron was transferred to Coastal Command to perform daytime antishipping sorties. Initially still using the Vickers Wellington, the squadron soon switched to the Consolidated Liberator.

Czech street art artist Vladimir Hirscher made the graphic design for the special livery. For him it was a great challenge because it was his first experience for spraying military equipment. A total of 50 kg paint was consumed with a total helicopter area of 100 m2.

At the forward fuselage of the helicopter is a tiger’s head which connects the squadron with the NATO Tiger association. On the central fuselage you can see the Vickers Wellington on one side and the B-24 Liberator on the other side. The emblem of the 80th anniversary of the 311th Czechoslovak Bomber Squadron is displayed on the tail section. The night sky scene on the rear fuselage and tailboom shows 311 stars related to the squadron number. 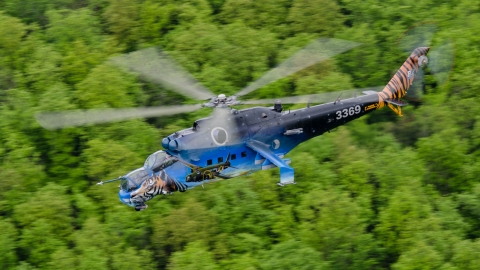 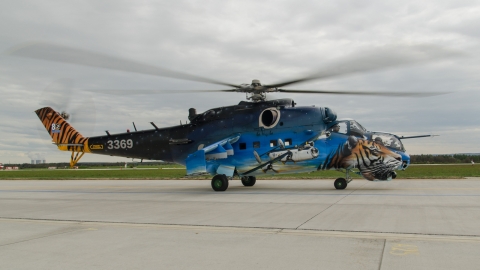 Currently the CzAF operates seven Mi-24s and nine Mi-35s with 221.vrl/22.zL at Námest nad Oslavou. These attack helicopters will be replaced by eight UH-1Y Venoms and four AH-1Z Vipers in 2023.