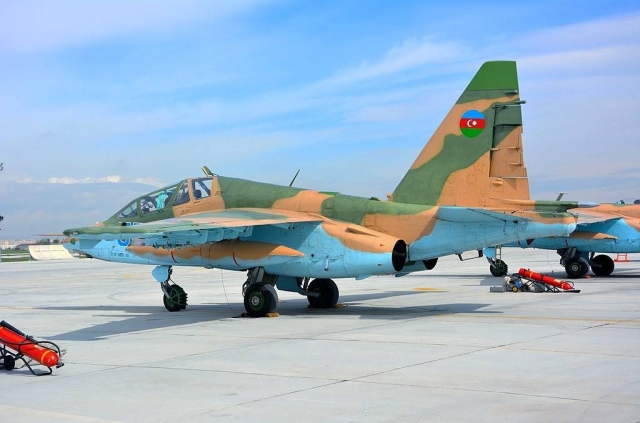 The Azerbaijani side admits one Su-25 attack aircraft having been shot down by the Armenian air defence forces. The pilot, Col. Zaur Nudiraliyev, was killed and posthumously awarded the title Hero of the Patriotic War.

The published material specifically mentions the primary role of the Su-25 aircraft in the conflict being suppression and destruction of the enemy air defense at the locations of Agdere, Fizuli Jabrayil and Hazgut. Due to a new generation of air defence systems having been acquired by the Armenian side (presumably the Tor-M2KM short-range system), the Azerbaijani pilots have employed NATO-style attacks from high altitudes, employing precision guided munitions, most notably Soviet-standard QFAB-250 high explosive fragmentation bombs with the LGK (Laser Guidance Kit) guidance complex developed jointly by the Research Institute of the Ministry of Defence Industry of Azerbaijan and Turkish company ASELSAN.

The mentioned shotdown of the Su-25 occurred on 4 October 2020 in the Jabrayil region where a pair of Su-25s was returning from a bombing run. The Nudiraliyev’s wingman, Lt.Col Elchin Mamedov, reports about a sudden loss of communication with his flight leader. When he turned around to see what happened, he could only see the wounded Sukhoi falling down to the enemy territory without any parachute in sight.

Sources on the Russian aviation forums report about the Armenian 9K33 Osa (SA-8 Gecko) battery being responsible for the kill, with its commander employing the tactics of keeping the Osa’s target acquisition radars of the 1S51M3-2 Land Roll system shut off and only relying on the 9Sh33 electro-optical tracker until the very possible second before the launch to minimize the detection possibility.

The exact data regarding the losses of the Azerbaijani aircraft in the war is still hard to come by. Many non-Azerbaijani sources point out at obvious discrepancies between the alleged dozens of deceased pilots being paraded as nation’s heroes while only one attack aircraft and two helicopters have officially been lost in the conflict.

Scramble Magazine researchers will continue working hard trying to update the post-war Air Order of Battle of the Air Force of Azerbaijan in order to assess the exact numbers.

Please visit our Azerbaijan Air Order of Battle and if you have new information and/or updates, please use the updates form at the bottom of the page.