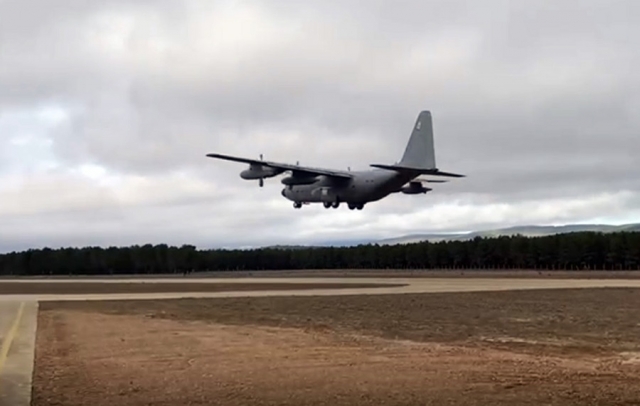 Belgian and Spanish C-130Hs to be stored at Garray

The remaining Hercules transporters from Belgium and Spain have been acquired by the US company Blue Aerospace LLc. The transporters will be temporary stored at the airfield, after which they will be taken apart for spare parts. The company is specialized in C-130 support and claims the world’s largest inventory of C-130B/H rotable and structural parts. They also hold the production rights for the C-130 Roll on Roll Off MAFFS firefighting system.

In 2020, Blue Aerospace was part of an industry team that bought the Belgian Air Force Hercules fleet including, aircraft, engines, propellers, spare parts, and ground support equipment. The EdA sold the Hercules aircraft to Blue Aerospace after almost 50 years of operation and will receive 80 million euro for the sale.

According to the website of Blue Aerospace, the company is a Global Supply Chain Provider, and an industry leader in the provisioning of a wide range of innovative services and support concepts to military end users and their maintenance partners worldwide. They focus on the aftermarket support of platforms and systems, working closely with customers and OEMs (Original equipment manufacturer), and often investing on their behalf in inventories, and support methodologies, allowing for their continued mission-readiness.

The coordinator of the Aeroparque Tecnológico Industrial (ATI), José Antonio de Miguel, indicated that there is no scheduled date for the arrival of the Belgian aircraft.

Layônair, a company which is developing the master plan for the Industrial Technological Airport (ATI) will first built some hangars at the airfield.