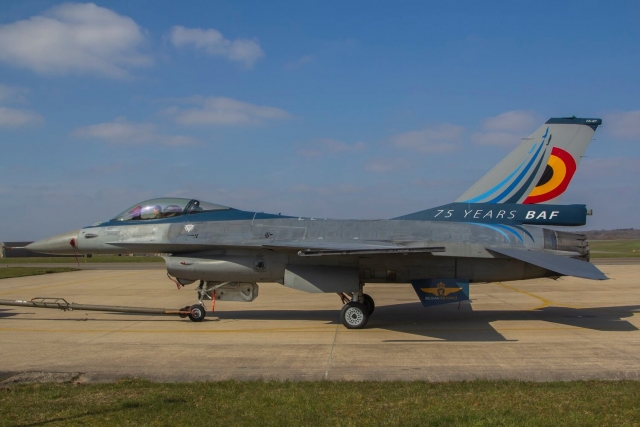 On 15 October 2021, the Belgische Luchtmacht (BLu, Belgian Air Force) celebrates its 75th anniversary. For this occasion, they painted Florennes based F-16AM Fighting Falcon, serial FA87, in a special livery.

According to the air force, the special livery shows a three planes logo on the tail representing the link between the present, the past and the future. The silhouette of the Spitfire refers to the first fighter aircraft operated by the BLu. On 15 October 1946, two squadrons, the 349th and the 350th, took off from their RAF airfield in Fassberg, Germany. Their landing at Evere Airport was part of the inauguration ceremony and marked the very beginning the current air force. The F-16 symbolizes the contemporary deployments of the assets and personnel in operation: in the Balkans, through Afghanistan and Libya until today's mission in the Middle East and in the Baltic States. The F-35A Lightning II is already a nod to the future.

The air force still intends to go ahead with the Belgian Air Force Days at Florennes air base on 26 and 27 June 2021. So hopefully, the event can go on and aviation enthousiasts are able to photograph this special livery F-16.