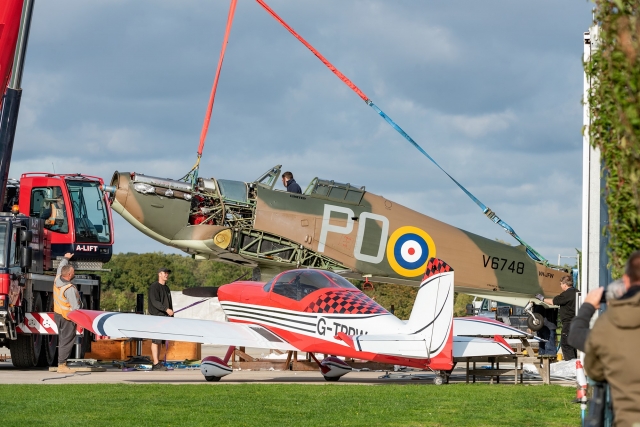 A Hawker Hurricane Mk.XII, former RCAF5481 (c/n CCF/60372) that was restored in the United Kingdom in the years 1986 to 1991, has returned to this country. It was unpacked at Sywell Aerodrome on 11 October 2021. The fighter, coming from Australia and still registered as VH-JFW, has been sold via Platinum Fighter Sales. It is destined for an, until now, unknown European customer.

The fighter was manufactured by Canadian Car and Foundry (CC&F) of Fort William (Thunder Bay) in 1942 based upon the Hawker Hurricane II version from the UK with the 12 Browning 303 machine gun wing.

It served with various RCAF Squadrons including 31 Operational Training Unit (OTU), 1 OTU and No. 9 Bombing & Gunnery School from July 1942 until it was struck off charge in November 1944 and disposed of by Crown Assets in Canada. The aircraft was then said to be stored in a field and survived the horrific Canadian winters in relatively good shape.

From the mid-1980s there were two attempts In Canada to restore the aircraft, but both failed. It was then sold to UK based collector Charles Church in 1986. Restored by Paul Mercer the Hurricane made its first post restoration flight as G-ORGI in September 1991. It was finished as ‘P2970’, a Hurricane Mk.I that was flown by Pilot Officer Geoffrey Page of No. 56 Squadron RAF.

The Hurricane then passed on to the USA when purchased by David Price in 1991, following the tragic death of Charles Church in 1989. The aircraft arrived in the USA in 1992 and was registered as N678DP and painted as P2970 ‘US-X’.

It was first flown at Chino California joining the fleet of Warbirds at the Museum of Flying (MoF). With the closure of the MoF in 2002, the Hurricane was sold to Ed Russell and added to his collection in South Niagara, (ONT) Canada. It then became C-FDNL but retained its RAF livery. 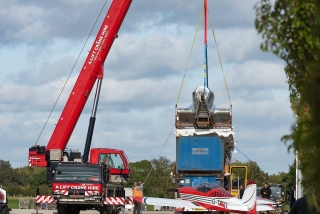 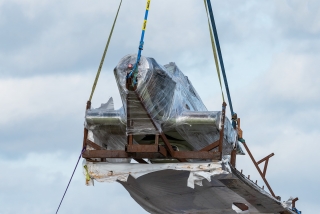 In 2014 after advertising the aircraft for sale it came to new owners at Scone (Australia) and was placed into the hands of Vintage Fighter Restorations at Scone, NSW. It became VH-JFW.There, although the Hurricane is a Mk.XII, it was finished as a Mk.I, V6748 of No 46 Squadron, with code ‘PO’ as flown by an Australian pilot in the Battle of Britain, John Dallas Crossman.

Last year the owner decided to offer his Hurricane for sale, and it was shipped to the United Kingdom. For now we are just curious where it will end!