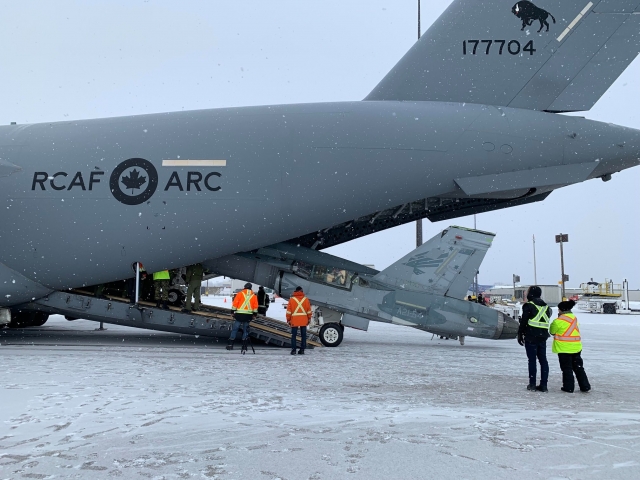 Another six F/A-18As destined for Canada have become known

Canada procured 25 F/A-18A and F/A-18B Hornet fighter aircraft and parts from the Government of Australia to rapidly increase availability of its CF-18 fleet, in order to ensure that the Royal Canadian Air Force (RCAF) can meet all obligations simultaneously.

Of these 25 former Royal Australian Air Force (RAAF) Hornets, eighteen will be converted to Canadian standards for operational use. These aircraft are the same type as Canada’s current CF-188 and CF-188B fleet and can be integrated quickly. Modifications and technical work will be done by Canadian companies.

The first two F/A-18s arrived on 17 February 2019. These two had participated in the Red Flag 19-1 exercise at Nellis AFB (NV) and were flown to CFB Cold Lake (Alt.) afterwards. Further aircraft deliveries were airlifted from RAAF Base Williamtown (NSW) to Montréal International-Mirabel (Que.). At Mirabel, the former RAAF veterans will be inspected, upgraded and will receive a new livery and serial.

Scramble Magazine has knowledge of eighteen known serials out of the 25 that have been procured. After inspection at Mirabel, it is decided which aircraft will be selected for operational use. The deliveries continued at regular intervals, and aircraft will be integrated into the CF-188 fleet as soon as the modifications are completed. The final aircraft are expected to arrive at squadron level by the end of 2021.

Known former RAAF serials. The Hornets will be reregistered with the RCAF as 1880xx for the single seat aircraft and 1881xx for the dual seat aircraft: