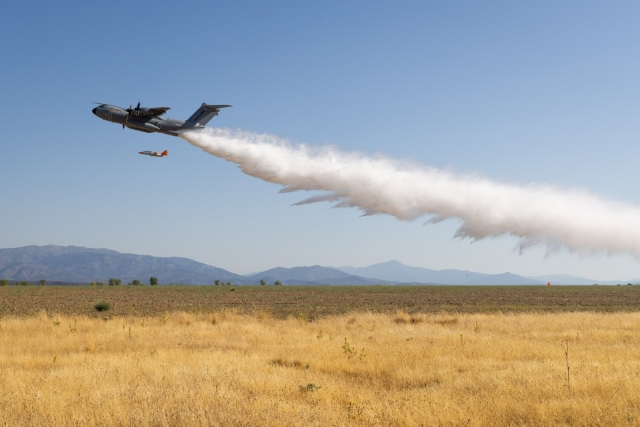 In July 2022, Airbus Defence and Space successfully tested a removable firefighting demonstrator kit on the Airbus A400M tactical transport aircraft. The special developed firefighting kit can be rolled into the cargo hold of the transporter without making any modification to the aircraft.

The A400M used in the test campaign was one of the prototypes, registration A4M006 (msn 006). The development of the prototype firefighting kit and the tests have been carried out in close collaboration with the dedicated aerial firefighting unit of the Ejército del Aire (EdA, Spanish Air Force), Grupo 43.

On 21 July 2022, during a test in Guadalajara, Central Spain, the A400M released 20 tons of water in less than 10 seconds. As a comparison, the Grumman S2F Tracker can carry up to 3,5 tons of water, while the Canadair CL-415 has a capacity of 6 tons. Converted C-130 Hercules transport aircraft using the Modular Airborne Fire Fighting System (MAFFS) can release up to 11 tons.

Airbus Defence and Space released a video of the demonstration in Guadalajara.

Photo by Airbus Defence and Space