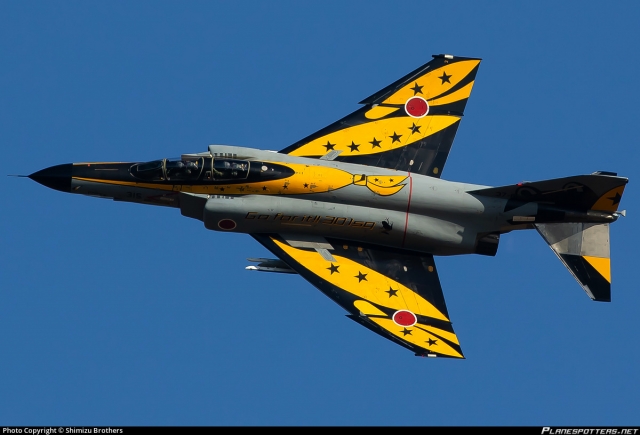 Friday 20 November 2020 was the day 301 Hikotai of the Japan Air Self-Defense Force (JASDF) stopped flying the F-4EJ Kai Phantom. This squadron was the first JASDF combat unit which received the F-4EJ in August 1972 and was first named Rinji F-4EJ Hikotai, then Rinji 301 Hikotai anf finaly 301 Hikotai in October 1973. The unit moved from Hyakuri to Nyutabaru in March 1985 and returned to Hyakuri in October 2016.

In the days prior to the 20th both specially marked Pantoms (37-8315 and 07-8436) made a farewell-tour visiting most JASDF fighter bases.

On this friday, 20 November 2020, the two specials together with a standard Spook performed probably the last operational flights for 301 Hikotai, broadcasted live on Japanese television. In a hangar ceremony later in the day the unit officially stood down as a Phantom unit. It will be resurrected at Misawa as the second F-35A unit.

It is possible some flying activities will be performed in the coming weeks, perhaps ferrying Phantoms to other bases for preservation. We know Miho and Komatsu have received aircraft for display, however Chitose as a former Phantom base and Hamamatsu for the JASDF museum are also options.

This is not the end of Phantom operations within the JASDF as the Gifu test unit still operates several non-modified F-4EJs and one Kai. The Hiko Kaihatsu Jikkendan will probably say good-bey to the Spook at the end of the Fiscal Year, so at the latest in March 2021.