Had a base visit here in 1996 ( March 8 ), but perhaps it's not very likely they flew the same helo's more than a decade later:

Needless to say, all fiscal years were read off from the data blocks.
Ben
Scramble member, reader & contributor since 1984
Top

Most excellent, thanks for posting!
Top

Maybe this parking overview from March-8th 2009 will help too. If needed, I can supply additional photos for referencing, or e.g. matching some colour schemes.

@Mark,
Are you perhaps able to confirm the missing RSingAF and AAC Apaches based on their positions? 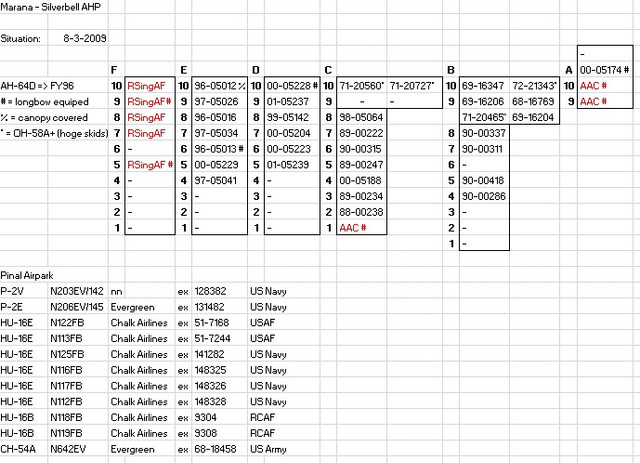 Similar plot to a week before, although a few had moved around, and no Singaporeans around. We only saw seven HU-16s, N117FB isn't noticeable in any photos.
Top

I wish I had David, but I got married the day after...and you probably know what that means

Similar plot to a week before, although a few had moved around, and no Singaporeans around. We only saw seven HU-16s, N117FB isn't noticeable in any photos.

Had another look and found another HU-16 lurking by a hangar close to the main ramp. Could this be the elusive N117FB?! Where is it in your photos Sjoerd?
Top

I pictured a group of 7 (probably without N117FB) on the north east side, next to the 2 Neptunes. I do recall seeing one seperately of this group, but I don't have it on picture. Maybe it was someone else in our group who ID'ed it.
-Good intell, allows for good decision making!-
Top

Sjoerd wrote:I pictured a group of 7 (probably without N117FB) on the north east side, next to the 2 Neptunes. I do recall seeing one seperately of this group, but I don't have it on picture. Maybe it was someone else in our group who ID'ed it.

I have a group of seven, with the Neptunes, all identified as per your list, except for N117FB. A quick Google produces a photo of it in Florida in April 2009, and of it at Marana in 1989! However there is another one visible outside the second hangar up from the southern end, and as we departed there was also N51ZD on the ramp (which wasn't there when we arrived!)
Top

Sjoerd, here's our overview from the 13th. As you can see most are in different positions, so not much help I'm afraid.
Most likely the AAC Apache on E1 is one from row A and was moved while we were inside a hangar as I believe there were only six on TDY.

Thanks Mark!
The US Army examples had indeed moved around a lot. Still, the RSingAF examples seem to show the same positions (matching the longbow radar). All had the same load out incl. 1 hellfire on each of the the inner lower station, apart from the one on spot E10 which had none (see image below, bottom left)! 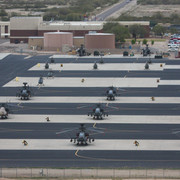 Could you confirm if this matches your pics as well? Also, where there only just five present during your visit (of the eight on strength)? Looking closer to my images, I can confirm now that Apache 92056 was present and still on the same spot (E7). I could ID it from the vertical striping on the left engine cowling, which normally are two black lines, but these had been faded/overpainted. 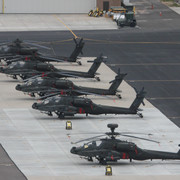 The second from below 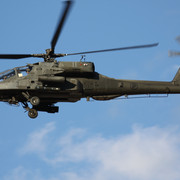 One day later at DM AFB

The 2 AAC Apaches on ramp A(lpha) seemed under light maintenance when looking at my pictures. 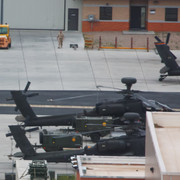 The whole album with some more pics, mainly covering the rows A,C & E, are here. It was the only day without sunshine during our 3 week trip, so shooting these from a plane in low light was challanging at the least: https://ibb.co/album/GHJrvK

If anyone can add anything, I would be thankfull.
-Good intell, allows for good decision making!-
Top

For some kind of reason we didn't take many photos of the Singapore's. None of us has the one on E10, can't remember why.
I have 52, 53 & 56 which all seem to have the same load out as you mention, but this might be standard?
We didn't visit their hangar this time, so can't tell if more were on base.
Checked my photos from 2008 too, but none of them had the longbow radar at that time.

Not much help at all.
Top
Post Reply
28 posts