This is the first step towards the conversion to the Airbus A400M Atlas,
which will be delivered from 2020 onwards.

The aircraft, registered CH-08,
has been in service since February 1973 and was retired on 27 December 2017.
It is at Beauvechain/Bevekom now..

The aircraft has 22,219 flight hours on the counter and needed to undergo major maintenance, which takes 6 to 7 months.

To avoid these high costs, it was eventually opted not to use it anymore.

"This take-out does not have an immediate effect on our support for operations," the air force emphasized.

The Belgian fleet is now reduced to ten C-130s,
which are used for tactical transport and operated by 21st Squadron of the 15th Air Transport Wing in Melsbroek.

"The CH-08 will be used in the form of spare parts for the benefit of the rest of the fleet", it says.

"In this way, the availability of the other aircraft will be improved, and they will therefore be operational for longer."

The 15 Air Transport Wing will also lose five passenger planes in the coming years. In the future it will be opted to work with rented equipment.

This contract, awarded at the beginning of July 2020 by the government
and the amount of which has not been revealed,
includes in particular the planes, engines, accessories, spare parts
as well as ground support equipment.

"As soon as the Belgian Air Force (in fact the Air component)
will operate via the (Airbus) A400 (M) fleet,
this contract will allow Sabena Aerospace to guarantee work on its maintenance line of C -130 in Belgium, "
said Blueberry Group President and CEO of Sabena Aerospace, Stéphane Burton,
in a press release.

"This will also ensure a return on investment for the Belgian economy
and allow Sabena Aerospace to develop end-to-end support for new and existing C-130 operators,"
he added.

Sabena Aerospace has been maintaining Belgian C-130s in its workshops in Zaventem for years.
It has joined forces for this market
with Blue Aerospace, an American company based in Tamarac, Florida (south-eastern United States),
active in the same type of activities,
in particular for the benefit of the American forces.

The General Directorate of Material Resources (DG-MR) of Defense,
responsible for the purchase and sale of military equipment,
launched on 23 May 2019 the procedure for the sale of nine C-130s, spare parts, tools
and other related support systems.

According to corroborating sources,
one of the nine aircraft will however be reserved for preservation at the Army Museum,
which has a collection of historic aircraft in its Air and Space section.

To replace these nearly fifty-year-old aircraft,
Belgium ordered seven Airbus A400Ms in 2003, plus one for Luxembourg,
the first deliveries of which are expected in the coming months.

Belgium had acquired in 1972 a fleet of twelve C-130H,
built by the American aircraft manufacturer Lockheed Martin.

One aircraft, the CH-06, was lost in an accident on July 15, 1996 at Eindhoven Air Base (southern Netherlands),
killing 34 people, including the four crew members and members of a Dutch military band.

Another, the CH-02, was destroyed on May 4, 2006
in the fire of a hangar of the company Sabena Technics in Zaventem during a major maintenance.

It was replaced in March 2009 by a second-hand aircraft
- an ex-C-130E "hurricane hunter" within the US Air Force - older,
because built in 1965,
but brought to the same standard as the rest of the fleet, the CH-13.

The Belgian army on Thursday withdrew from service a fourth C-130H Hercules transport aircraft,
the aircraft registered CH-04 in service since October 1972,
as part of the transition to the imminent arrival of the first A400M Atlas.

The plane made its last flight on Thursday,
after a career of nearly 48 years with the 20th Squadron of the 15th Airlift Wing, based in Melsbroek.
He has accumulated more than 23,203 flight hours and 17,176 landings.

The current fleet therefore only comprises seven aircraft,
whose career will in principle end in December 2021.

Delivery of the first Belgian A400 seems to be slated for October,9th
Scramble member since 1990
Top

We tried to look at your requests but unfortunately we are bonded to a lot of restrictions due to meteo and rules....

Timings are not fix and unfortunately we can not give life updates. So check flightradars !

All is variable due meteo and other circumstances.

This week CH-09 will perform his last duties for our Sqn.

We will try to inform you about his movements this week.

He will perform trainings in Belgium.

Depending of the meteo and tech status, he will perform his final flight on Thursday.

We are very thankfull for all the duties he performed, and we now offer him his well deserved rest.

His parts will get a second live in other airplane structures ... 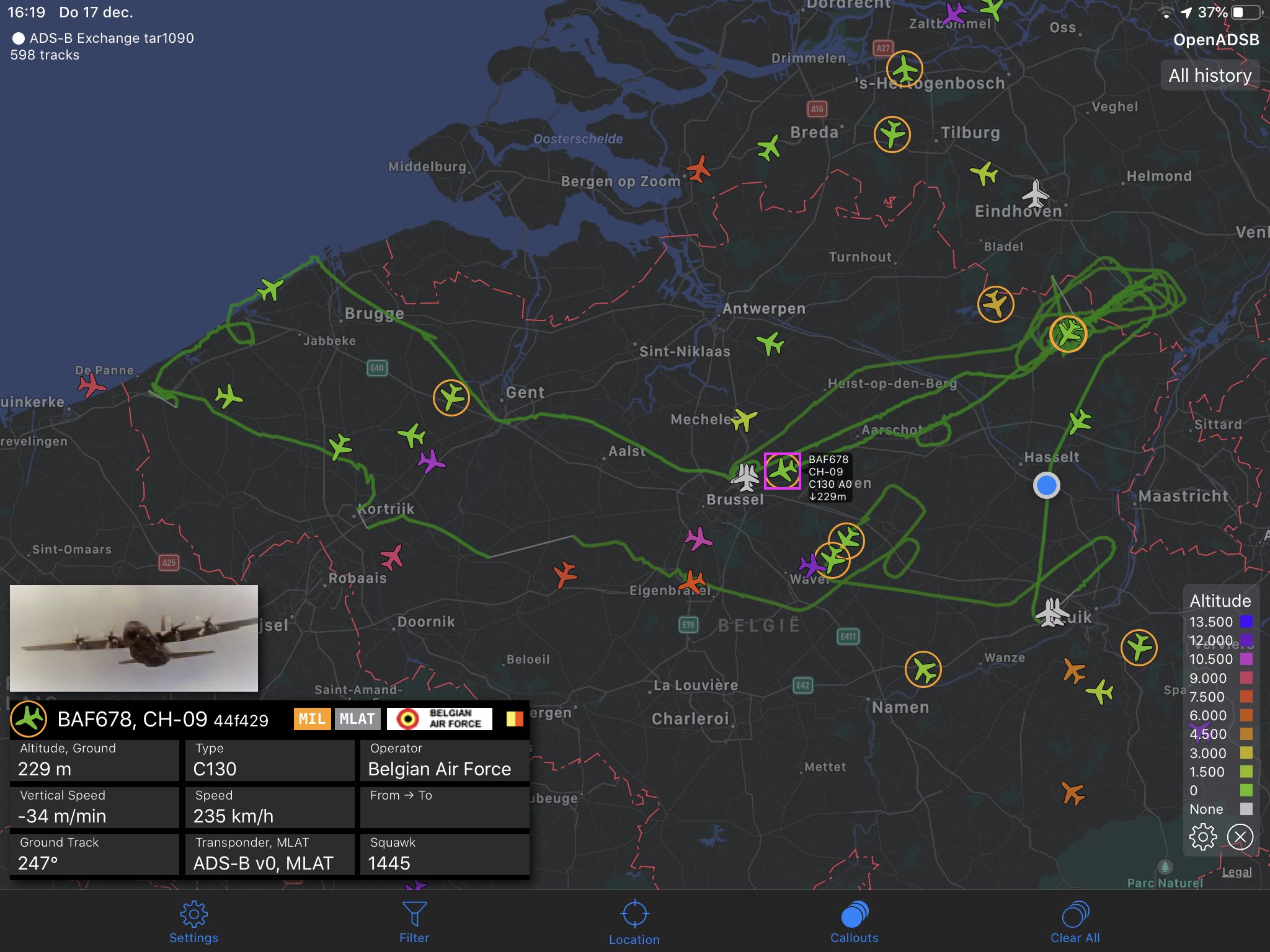 The oldest C-130 of the army has to go to Beauvechain: "The logical choice"

The aircraft will go to the War Heritage Institute, which will exhibit it in Beauvechain.

The non-profit organization Dakota, a documentation center for military air transport, wanted the oldest C-130
- keep 'home' with license plate -
at the airbase in Melsbroek.

To achieve this, the non-profit organization Dakota started a petition.

Because the War Heritage Institute, which will get the C-130, has other plans.
The institute wants to exhibit the C-130 in Bevekom.

The chance that Minister of Defense Ludivine Dedonder (PS) will leave the C-130 in Melsbroek seems very small.
The decision has already been made.

“It is the mission of the War Heritage Institute to preserve and display military heritage.

That the device goes to the WHI is the logical choice.

They will exhibit it to the general public in the museum of the 1st Wing in Bevekom ",
says her spokesperson Cedric Maes.

The previous minister and chief of Defense had already reached an agreement in principle on this.
"Minister Dedonder followed that agreement."


The Belgian Army resold nine C-130s, spare parts, tools and other related systems to Sabena Aerospace,
a company belonging to the new Blueberry group, and Blue Aerospace, a company of the American group Heico.

These aircraft will all be withdrawn from service by the end of 2021
and replaced by eight Airbus A400Ms, including one from Luxembourg,

but one of them (CH-13) will have to be contractually preserved.

The Minister of Defense, Ludivine Dedonder, "confirmed" and "reconfirmed" on Wednesday
her decision to entrust the museum housed at the Beauvechain air base with a C-130H Hercules transport aircraft

that the army is preparing to decommission,
rather than to grant it to a non-profit organization established in Melsbroek, Flemish Brabant,
during an agitated meeting of the House committee.

Ms. Dedonder (PS), who gave the Defense Committee a note that opposition parliamentarians had been waiting for several weeks,
said she followed a decision taken by her predecessor, Philippe Goffin (MR).

"On May 26, 2020, my predecessor made the decision to transfer a C-130 to the WHI," she said,
recalling that the Council of Ministers had given its agreement in July 2020 to the resale of its aircraft
after their withdrawal from service and their replacement by the new Airbus A400Ms,
with the exception of one aircraft - the one registered CH-13,
the oldest in the fleet used by the 15th wing of Melsbroek.

"On December 7, 2020, I decided that the transfer of this device be confirmed to the WHI
(the War Heritage Institute, the defense parastatal dedicated to the conservation of military-historical heritage
and to memory) to be exhibited at Beauvechain ",
added the minister in response to questions from deputies Annick Ponthier (Vlaams Belang) and Theo Francken (N-VA).

It justified this decision in particular for cost reasons
- 350,000 euros for its conservation in Beauvechain, against 600,000 euros in Melsbroek,
greater accessibility at the base of Walloon Brabant
and a greater number of visitors to the museum located in Beauvechain,
the 1st Wing Historical Center (1WHC)
than that of the Dakota Historical Center association of the 15th wing,
located in the enclosure of the base of Melsbroek.


The first week of March will be full of emotions !
CH13 starts his last active month in our Sqn but ....


Due to the busy schedule of our aircraft and crews at this end of lifetime,
we were not able to perform an official last flight with CH13.

)
giving the possibility to take some last shots.

Monday 26 April 2021, around 10hr30 Local,
CH13 is planned tot leave her home base for the last time, CH13 will then (we hope very soon) be accessible as a static display
(under WHI) to be remembered for the coming generations.

If the C-130 museum was inaugurated on July 1, visitors will have to wait until July 11 to see it. A look back at the life of this legendary Defense aircraft.

Ironically, it is on Sunday July 11 that the C-130 museum will be accessible to the general public in Beauvechain, on the feast day of the Flemish Community. However, we know that the decision to entrust this mythical military transport plane to the War Heritage Institute, which opted for the First Wing Historical Center as an exhibition venue, was not well received by certain Flemish and military deputies from the Melsbroek base. , in Flemish Brabant, where the aircraft had its home base within the 15th Wing.

But the C-130 will spend a happy retirement in Walloon Brabant where it will be well displayed and accessible to the general public, as the Minister of Defense, Ludivine Dedonder (PS) wanted. The latter also recalled, on April 26, when the plane arrived in Beauvechain that it is neither Flemish nor Walloon, but Belgian.

On July 1, the Minister was again present for the official inauguration of the C-130, the only copy that Belgium will keep once the last C-130s retired at the end of this year, replaced by A400Ms of which the first copy, out of the 7 expected by the Defense, was delivered in December 2020.

This inauguration is an opportunity to retrace the journey of "this workhorse of the Air Force", as the WHI puts it. Because the C-130 is an iconic aircraft of the Air Component, just like the F-16 fighter plane.


Of the 12 C-130s acquired, the Defense will lose two. The first on July 15, 1996. The plane crashed into Eindhoven Airport, the Netherlands, killing its crew and the Dutch marching band it was carrying, a total of 37 people. The second on the night of 4-5 May 2006 during a fire in a hangar in Zaventem, where he was for an interview.

This will be replaced by a new aircraft bought from the American firm Evergreen Aviation. It was built in 1965 and was used as a weather reconnaissance aircraft to hunt hurricanes for the USAF on the island of Guam and in the state of Mississippi. After being upgraded, it entered the service of Belgium in March 2009. It is this C-130 which is exhibited at Beauvechain where a larger museum center linked to aviation is expected to develop in the future. .

The C-130 is visible at the First Wing Historical Center (20, rue Longue), in Beauvechain every 2nd and 4th Sunday of the month, from 2 p.m. to 6 p.m. and on the 1st Sunday, but then only for groups and subject to availability. guides. Tours can also take place on Tuesday afternoons during volunteer day. Price: € 7. Due to the Covid measures, all visits are currently by reservation (visite@1winghistoricalcentre.be or 0474 19 92 76).