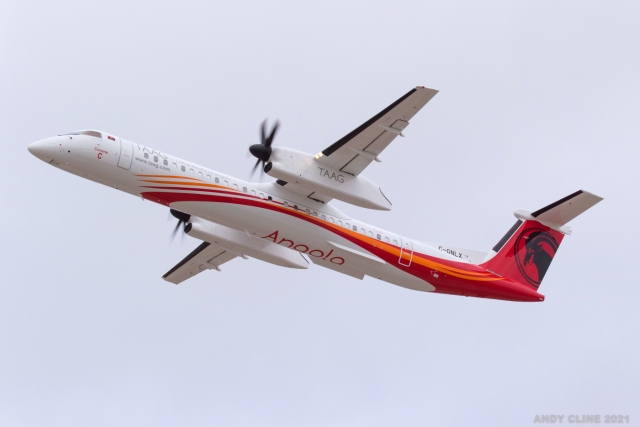 The first TAAG DHC-8-400, registration D2-TFA (c/n 4616) named 'Kwanza' started its delivery flight on 27 July 2020. Using its Canadian test registration C-GKXM, the aircraft was ferried via Downsview, St. John's Intl (Nfld.), Santa Maria (Acores), Nouakchott/Oumtounsy (Mauritania), Abidjan/Port Bouet (Cote d'Ivoire), and Luanda/4 de Fevereiro (Angola) where it arrived on 29 July 2020. It made its first flight in TAAG service on 20 May 2020. This is the first non-jet aircraft in the current TAAG fleet.

The latest TAAG DHC-8 sports a brand new livery featuring enlarged grey TAAG titles in a new font on the forward fuselage and engine nacelles, an enlarged truncated logo on the tail and reduced Angola Airlines titles on the right side and Linhas Aereas de Angola on the left. The tail colour extends to the bottom of the fuselage, and sweeping red and orange lines extend forward on the lower fuselage.

TAAG ordered six DHC-8-400s, announced by Bombardier on 29 March 2019, as an unidentified customer. The order was confirmed at the 2019 Paris Air Show, in conjunction with DeHavilland Aircraft of Canada officially taking over the type certificates of the entire DHC-8/Q Series family from Bombardier, and officially taking over the DHC-8-400 production line at Downsview Airport in Toronto. The TAAG deliveries were originally scheduled for four aircraft to be delivered in 2019, and the balance in 2020. They were to be operated by a new joint venture regional carrier; Angola Expresso, which was shelved, so TAAG mainline took over the new fleet.

In a statement, the Chairman of TAAG Angola Airlines, Rui Carreira, mentioned: "TAAG is looking to the future of our fleet and the market opportunities where the DHC-8-400 will be an important part of our growth strategy. The acquisition of these new aircraft is important to support a stronger domestic network and support our regional and international network", the DHC-8-400 offers unmatched performance and outstanding economics that will allow us to better serve smaller communities and increase frequencies in Angola." 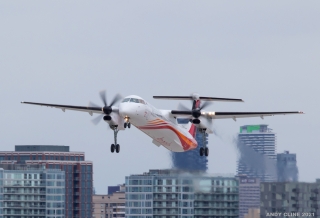 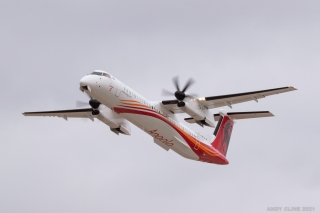 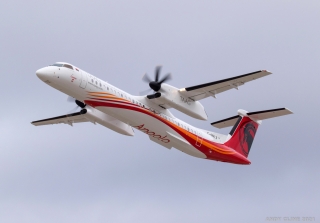 TAAG, owned by the Angolan government, currently has an all-Boeing fleet of five Boeing 737-700s, three Boeing 777-200ERs and five 777-300ERs. It previously operated Boeing 747-300s, a Douglas DC-8 and a Lockheed L1011 Tristar. TAAG formerly operated Fokker F27 and Fokker 50 turboprops for its regional network a number of years ago. The DHC-8s are the first regional airliners that TAAG has operated in recent years. Assorted commuter jets are operated by various small companies in Angola. The Angolan Government also owns two VIP configured Q400s acquired in 2011. It operated two DHC-8-300s before that.