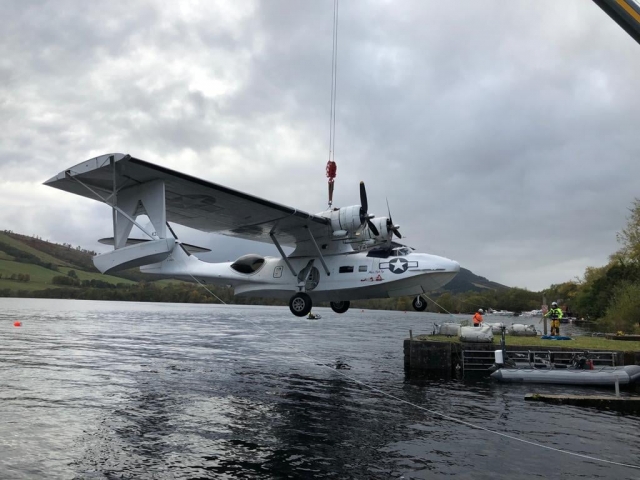 "Miss Pick Up" is feeling better

The condition of Consolidated PBY-5A G-PBYA has substantially improved in the last days. As we reported on 21 October 2020, Britain’s sole airworthy Catalina was grounded as the result of a failure of the starboard engine on 17 October 2020.

Initially thought to be caused by a faulty starter engine, the problem turned out to be more severe: a sheared accessory drive shaft. So a complete engine change was the only solution. And this was only possible after the Catalina was lifted out of the water of Loch Ness.

In the past weeks the maintenance crew has carried out this task out in the open, and they were awarded by an uneventful first engine run on 19 November!

So if all goes further according to plan, "Miss Pick Up" will soon be hoisted on the surface of the lake and prepared for her flight back to Duxford so she will be safely inside before the winter.

The replacement engine had, newly overhauled by Andersons in Idaho (USA), only arrived at Duxford in July this year. The engine change had already been planned but in a more convenient place at a more convenient moment. The faulty port engine which has run approx. 1,090 hours since its last overhaul, has been in use with Plane Sailing since 2008. It was meant to have been changed during winter overhaul and was meant to be kept as a serviceable, but high time, emergency spare in the hangar. If all goes well, the new engine will be a reliable powerplant for the next approx 1,000 - 1,200 hours, or 10 - 12 years, whichever comes sooner. 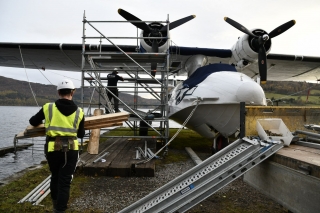 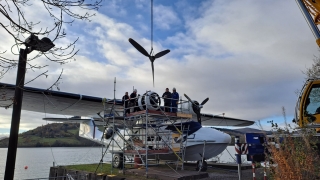 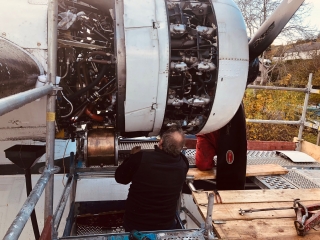