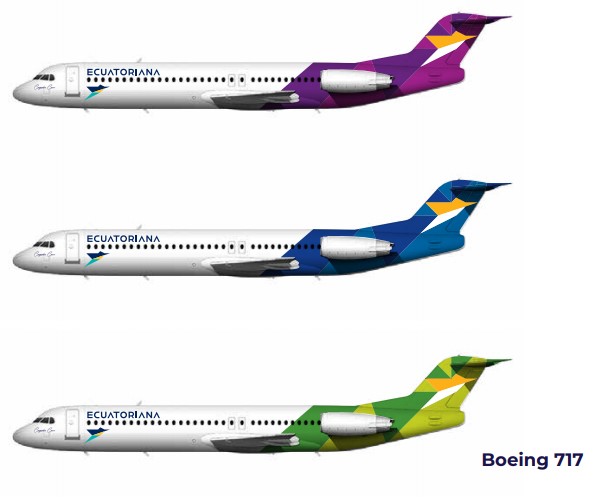 On 29 April, start-up Ecuatoriana Airlines has unveiled its branding after outlining its fleet strategy a few days earlier.

In February, we reported that the airline was planning to launch with a fleet of DHC-8s but Ecuatoriana has now changed this and is set to first add two B717-200s on lease from Boeing Capital Corporation. By November, the airline is hoping to add the DHC-8-400 and is in discussions with Ethiopian Airlines about this. Ecuatoriana Airlines is set to work together with Delta Air Lines in training crews and for maintenance support for the B717.

Once it receives its AOC, the airline will launch with domestic airlines and has reached a deal with the government in which the government will subsidise the airline's fuel bill with 40% and exempt it from landing-fees for state-owned airports for two years.

Interesting to note is that the airline's marketing department made a small error by providing illustrations of the livery on a Fokker 100 instead of the B717. But hey, at least it's the same general shape.