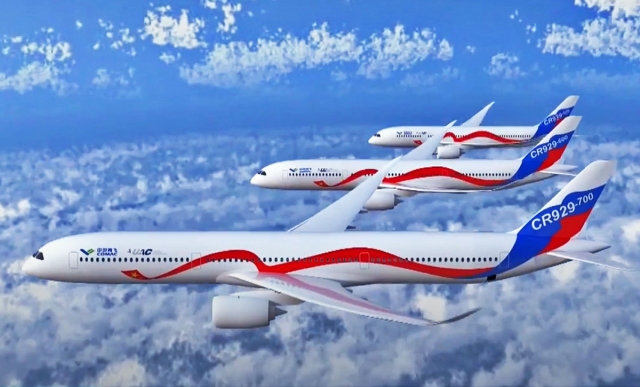 The general engineer of COMAC has announced that production of the CRAIC CR929 widebody aircraft is to commence later this year, freezing the aircraft's design, specifications and supplier base.

The CR929 was originally launched by COMAC as the C929 in June 2011. A year later, COMAC announced that it would study the possibility to set-up a joint-venture with Russian manufacturer UAC to develop a widebody aircraft. In this joint-venture, Russia was to provide the knowledge and China the needed resources.

In May 2014 both companies reached a memorandum of understanding and shortly thereafter a feasability study was conducted to gauge market interest in a new widebody. UAC estimated that until 2033 the airline market would need up to 8,000 widebodies, including up to 1,000 in China alone. Based on the outcome of this study, the joint-venture started working on an initial design of the aircraft, which would be at least 50% composite. UAC was to provide the wings, while COMAC would build the fuselage.

The initial plan was to conduct first flight by mid-2021, with certification and first deliveries towards the end of 2024. However, the timelines slipped a little bit, but in June 2016 both companies finally officially signed the agreement for the 50-50 joint-venture, which was launched as CRAIC on 22 May 2017. The new timeline would be a 2025 maiden flight, with deliveries starting in 2028. However, UAC and COMAC had issues regarding supplier-selection and the project has now slipped with at least another year.

In September 2017 the planned aircraft was launched as the CR929. Assembly will take place at COMAC's-facility at Shanghai-Pudong and the project will be managed by CRAIC, which will take the responsibility for the technical development, manufacturing, marketing & sales, customer support and overall project management.

So far, no official orders have been announced for the aircraft, but is expected that both China and Russia will order the aircraft for their state-owned airlines.