The Stockton Metropolitan Airport is located on the Southern boundary of the city of Stockton in the heart of California's central valley. The Airport is conveniently located between two major north-south thoroughfares; Interstate 5, 1.5 miles to the West, and State Highway 99, which borders the airport on the East side. In the months preceding World War II, the U.S. Army entered into the first of many lease agreements with the City of Stockton (on 15 August 1940) to build and operate an Army training facility at Stockton Municipal Airport. In October 1946 Stockton AAF was declared surplus. The City of Stockton and the County of San Joaquin resumed operating the Stockton Municipal Airport on 16 December 1946 under a joint license. Nowadays it has a new large terminal, many hangars for Business and general Aviation and a large apron for the California Army National Guard.

The airport has two runways and most of the aprons on the west side. The Army apron is on the south side.

Around The Airport
1
landing Runway 11L/R.

On Ruggles Road, Park your car on the grass sides, and walk along Arch Airport Road towards your spot for all landing traffic on Runway 11L/R

From spot 1, drive further on Ruggles Road, along the Terminal and take a left onto Lindbergh Street. Here you have a view onto the many aprons and hangars. You can drive around here, via C E Dixon Street to all other hangars and aprons.

From spot 1, drive onto Ruggles Road, along the Terminal to the end. Take a left here onto Stimson Street and park your car after the turn to have a look at the Army apron.

From spot 3, drive back towards Road J3, take a left and a next left at a small road. From here you will have another view onto the Army apron.

From spot 3, drive back towards the crossing with Road J3. Just before Road J3, take a left onto Airport Drive and follow it, It will turn into a dirt road but you can follow it along the fence giving you a very close view onto the Army Choppers, maybe too close.

For spot 6, you have to follow the Getting There instructions onto Arch Airport Road. Now take a left onto Qantas Lane to drive towards the east side of the airport. After passing some sporting fields, after passing the extended runway, park your car to the right to the small inlay and position yourself.

Here you will find a preserved AH-1S Hueycobra. From spot 1, drive onto Ruggles Road, along the Terminal and at the crossing with Northrop Road you will find this helicopter. You will have another view onto the Army apron to spot the last chopper. 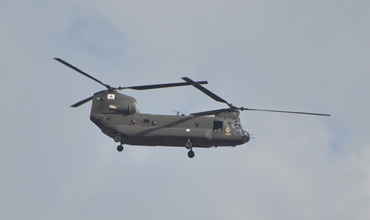 Wim Sonneveld was here and took a pictures of a Chinook from spot 6, so you can do the same!
Frequencies
Based
Preserved
More Info
Links
Other Airfields
Send Updates!