Weelde is well known for the large storage-area of the Belgian Forces. It holds several disposed F-16s and other aircraft. Base-tours are given regularly, by prior request obviously. The Air Cadets can normally be found here, attending a summer camp, from April until September. The Weelde Squadron has been disbanded.

The airfield actually consists of two parts. The active area is south of the N132 road. It has small dispersal areas on each corner, and larger taxiways and dispersal areas on the southeast and southwest side. The latter holds the air cadets hangar. The northwest side is occupied by the storage barns.

Take exit 11 from highway A58/E312 (Tilburg-Breda). Follow the N283/N12 towards Goirle. When you reach Weelde, take the first possibility towards Weelde Station. You will pass the airfield.

Around The Airport
1
Approach

From the road Weelde-Weelde Station/Merksplas, take the first road to the left before the perimeter fence of the airfield begins. Take the first right and you will reach the approach. Photography is possible with 200-300 mm.

Follow the road Weelde-Merksplas and take the N119 towards Turnhout. Take the first left. When you reach the field, follow the small road towards the east and you will reach the small hangar of the Air Cadets. 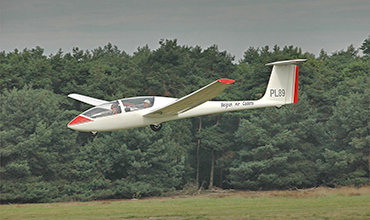 When asked, it is sometimes possible to photograph the Gliders on the field. (Dirk Jansens)
Frequencies
Based
More Info
Links
Other Airfields
Send Updates!