Soesterberg was the oldest airfield in The Netherlands and the birthplace of the Dutch air force. It has long been in use by the USAFE, but the last F-15s left in 1994. The Dutch air force used the base for the Fokker F27 Troopship, but they also vacated the base not long after the F-15s. For several years, the only inhabitants were the Chinooks, Cougars and Alouettes of 298 and 300sq. These too have now left, for Gilze-Rijen, and the base was closed at the end of 2008 - a silent end to the active life of this famous air base.

You can take the train to Den Dolder to get to the spots 3 and 4 from Utrecht, Amersfoort or Baarn. A bus from Utrecht and Amersfoort is stopping in Soesterberg town for the other spots and the museum.

Around The Airport
1
The Spottershill

This hill is located at the landing of runway 27, it gives you an overview over the runway, but you can't see the hangars from here because it is surrounded by trees.

On the south side of the main runway, there are multiple spots. As there is a small embankment along this side of the field, it is necessary to stand a couple of meters above ground level. The spot next to the gas station, on the grounds of a local sand moving company is no longer reachable, but you will find various other companies along this road. You could try to access their private grounds and find a tree or storage facility from which you will have great views of the runway and taxi way. The second spot is at the small industrial estate a little further down the road, where there is a crash gate with a view of the flightline on the other side of the base. If you continue on this road there is a small electricity box you can stand on and have a view of the helicopters in the camp and possible visiting aircraft.

On this spot at the west side of the field, you can see the shelters which are not used very often, but visiting aircraft will sometimes use them.

This runway is no longer in use, but from this point you have a view of the flightline and hangars on the opposite side.

The Militaire Luchtvaart Museum (Military Aviation Museum) is at the south side of Soesterberg town at the local military complex. It has some nice planes on display, including a DC-3 and a F-15. But most important, entrance is free! So you have to go there if you're in the neighbourhood. 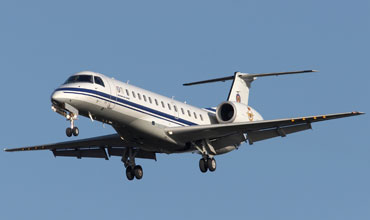 This fine approach shot of a Belgian ERJ135 on short final for 27 was taken near 'The Hill' (spot 1) by Remco Donselaar.
Frequencies
Based
Preserved
More Info
Links
Other Airfields
Send Updates!