In number of passengers, Rotterdam-The Hague Airport is the third busiest airport of The Netherlands, after Amsterdam-Schiphol and Eindhoven. A wide variety of traffic can be seen here, from the regular airliners, like the three Dutch holiday charter companies and British Airways, Lufthansa and Turkish Airlines, to light aircraft. A lot of bizjets and props are handled by the KLM Jet Centre at the airport. With the closure of Naval Air Station Valkenburg in 2006, Rotterdam also became a favourable destination for officials visiting the Dutch governmental seat Den Haag (dubbed 'The Hague' in English), to which the airport name was even adapted in 2010. In the old days, the airport was called 'Zestienhoven'.

Recent developments unfortunately involved large-scale fencing along airside ditches, presenting an additional challenge to photographers. At least as bad was the loss of the favourite former spot 1, at the fence along the main apron. New buildings have completely obscured the view there.

All activity takes place in the southwest corner of the airfield. Westernmost are the flying clubs, next is the terminal, and easternmost are the small private hangars and bizjets. The runway is southwest-northeast.

You can get to the airport via bus route 33, which runs from Rotterdam Central Station at regular intervals (up to 6 times an hour). There is also shuttle bus service 50 between the terminal and Meijersplein Randstad Rail railway. A timetable can be found with the link on the right. Spots 9 and 10 are within walking distance from the Meijersplein station of the Randstad Rail railway service.
By car the airport can be reached from the motorway A13 exit or local roads in the northern Rotterdam area.

Around The Airport
1
Terminal viewing area

The terminal has a small viewing area which is accessible via the terminal restaurant. It offers a very close view of aircraft parked in front of the terminal and is surrounded by a 1.80 m high glass fence, which is not tinted, fortunately. However, for taking pictures you have to watch out for reflections.
To the right of the terminal there are some limited views on the Echo apron (north side of hangars) and partly (head on) view of Jet Center ramp. The fence is the same as for vantage point 1, but the view is largely obstructed by aircraft handling equipment. Photographic opportunities are therefore limited.

When driving or walking towards the Jet Centre you could have a good view on the Foxtrot apron (south side of the hangars). When the doors of the Jet Center hangars are open, it should be possible to see some aircraft inside from this point.
Views on the Jet Center ramp itself are limited, but you should be able to identify most aircraft, if not from spot 3 then from spot 4. Photography used to be better here, but aircraft parked in the far corner of the Jet Centre ramp can be photographed from the right corner of the roundabout in front of the Jet Centre building (next to the building itself).
If VIP passengers are embarking or disembarking you are likely to be sent away, so take your pictures and move on again please.

It used to be possible to take pictures of bizjets from between the Jet Center and the Erasmus Catering building but a hangar has been constructed blocking the view. Until January 2014, on the right side of the Erasmus building (next to the ambulance helicopter ramp) limited views on the Jet Centre apron were possible, but a new fence has obstructed most of the view.
You now have to make a left and second left again from spot 3, and go around the back of the Medevac hangar. Then the Jet Centre ramp can be viewed. Photography is sometimes possible, although usually tail on and with large red/white blocks and/or long grass around the ramp.

This spot can be used to take pictures of aircraft taxiing to runway 06, but possibilities are limited. Stairs are needed and the view is largely obstructed by handling equipment and airport security building. Taking pictures of aircraft landing at runway 06 is also possible, although the fence will not help you.

Nice spot, although the view to the southwest (final approach) is somewhat limited by trees. To get here drive from the airport towards the Regardz hotel. Just before the hotel turn right on a small road and drive it all the way to the end.

If the sun has moved through the centreline rendering spot 5 useless for photography, you can move over to the crash gate along the Doenkade. For a 737 about 200-250 mm effective is needed. Be sure not to block the gate.

7
Along runway (north side) near threshold runway 24

Pictures of aircraft on the runway can be taken here in the evening. A 200 mm is sufficient for airliners. Smaller aircraft require 300 mm or more. Stairs are required as well.

Excellent spot, all day. Parking is next to the road. The only drawback is the limited view of the airport.

9
Along taxiway (south side) near threshold rwy 24

This used to be an excellent spot for photography but fences inside the perimeter have changed that. Viewing is still an option of course, with parking space available as well as benches to relax on. From this spot, there is no view of the airport ramp.

10
Along taxiway (south side) halfway the runway

Similar to point 10, but a bit closer to the taxiway. Every aircraft of size Falcon 20 or larger can be photographed here with 200 mm. The view of the aprons is getting worse with time as most of the former grass runway area is being used for buildings.
The spot is on a foot/cycling path, so not accessible by car. You can park your car near the horse riding school.

Construction work at this part of the airport resulted in large dirt mounds, providing a vantage point for runway, taxiways and apron viewing. Aircraft on the runway and parallel taxiway could be easily photographed from here, with additional but distant views of aircraft parked on the apron. However, apparent misconduct by enthusiasts is said to have forced the construction company to largely fence off this area.

The dirt mounds are just south-west of restaurant Brasserie Waalhaven, nicely modeled after a similar facility at Rotterdam's 1920s and 1930s airport Waalhaven. Its terrace offers splendid views over the runway and taxiway and photos can be made through/over the fence. The communication between aircraft and ATC may be broadcast. Be aware however that this is NOT a public place but a private domain, kindly ask for permission to use the terrace and leave nothing but thanks. 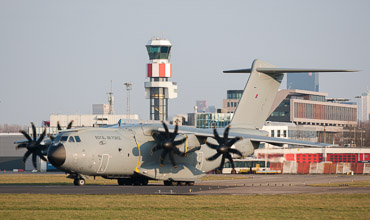 Impressive RAF A400 Atlas lining up for departure from runway 06. Shot from spot 6 by Manolito Jaarsma. 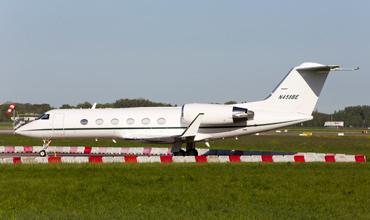