Ostend, as it is called in English, is an airport for quality, not quantity. Although the glory days of Il-76s and very large Antonovs are over, An-12s and DC-8s still touch down on this coastal airfield as well as other interesting freighters. After the demise of African International and MK Airlines, Ostend became the operating base of Meridian Airways. Unfortunately, its permit to operate out of Belgium has been cancelled. Additionally, Noordzee Helikopters Vlaanderen is based here at their newly-built heliport. Belgian civil and military airplanes use the field for circuit training, and holidays bring a handful of charters to its tarmac. Finally, the aero club will attract some nice classic or rare propeller aircraft every now and then.

The relatively recent addition of an apron on the eastern side has expanded the airport grounds, taking out a photo spot in the process. Apart from the new site, all airport activity takes place north of the single runway. The former runway 14/32 still determines the shape of the southern perimeter. South of the 08 threshold, we find the new Ostend Heliport of NHV, with its own ICAO code: EBNH. The terrain is flat and quite open, so getting the numbers at Ostend is usually no problem.

The airport lies southwest of town and is well sign-posted so driving here is easy. Public transport is also available; bus line 6 departs from Oostende train station to Raversijde and the airport.

Around The Airport
1
Terminal area

From the outside, many parked aircraft can be read off between the buildings. Inside, the restaurant offers a panoramic view of the main apron and spotters are a common sight here. The area is not very suitable for photography unless you do not mind shooting through the restaurant windows. If the numbers are what you want this is the place to be, completed by a quick look at spot 2 and 6 perhaps.

Long-time and inactive resident planes hug the fence here and a rather close inspection is often possible, albeit through that fence. Bring your steps to take photos over it, mind the backlight most of the day.

Conditions as for spot 2 when staying outside the premises. Now and then a DC-3 or other interesting visitor may be admired here. Restaurant Icarus has a garden overlooking the general aviation apron and taxiway to 08, but also a high fence.

A good spot abeam the western threshold and just north of the new Oostende Heliport. Directly to the east lies a camping site along the small lake. Unobstructed view and photo-opportunities for every angle on the runway. As close as it gets to heliport action, but for the best light on that one has to move back to the main road a little.

Very popular location near a crash gate. As runway 26 is mostly in use spectacular pics can be made here. Some time ago one could get even closer to the runway!

For the time, this apron is used exclusively by MK Airlines. It is possible to get the registrations of aircraft parked here from the public part of the access road, but photography is not really an option.

An alternative location on the most used final approach. Pick a spot between the businesses along the Torhoutsesteenweg. Not as good as the other ones, the aircraft are still a bit high here and parking may be problematic on weekdays.

This location can be a bit troublesome because most of the land is private property. Please respect this when enjoying the view on backtracks, landings and take-offs from here. Provided the backlight is no problem, this can be a good photo spot as well. Registration-wise some missing numbers may be collected here, like from the eastern part of the main apron. 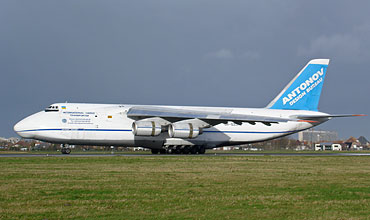 Though not as regular as a few years ago, An-124s still visit Oostende. This one was shot from spot 5 by Kristof Catteeuw. 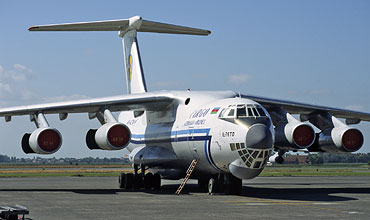 IL-76 4K-AZ14 parked close to the terminal was photographed at spot 1, from outside the fence, in 2001. (Erik Sleutelberg)
Frequencies
Based
More Info
Links
Other Airfields
Send Updates!