Originally founded as a military airfield in 1938, it was successively used by the German Air Force and (after 1945) the Royal Air Force. But from 1950, limited civil flights were allowed at the airfield, then still known as Köln-Wahn, to serve the (new) capital Bonn.
Restrictions to the number of flights were lifted in 1957, after which facilities were gradually expanded, cumulating in the opening of Terminal 2 in September 2000, and the name changed to "Flughafen Köln-Bonn" in 1968 (although the military still use the name Köln-Wahn).
Today Köln-Bonn still serves the Cologne & Bonn area, but is also the major cargo-hub in this part of Germany. The Luftwaffe (German Air Force) has based the main part of its VIP fleet here. Also the Canadian forces use this airport for (refuelling of) transport aircraft.

By car you can reach the airport by travelling the A59 highway between Köln and Bonn and the airport is signposted. Public transportation (train and bus) is available as well and detailed information is given on the website of the airport.

On top of Terminals 1B and 1C special viewing areas exist. From the area on top of terminal 1B, you have an overview of all the runways, the military platforms and the WDL hangar (both on the west side of the airfield), but photography is limited here to the adjacent platform. Terminal 1C is the best place for landings on runway 14L. It is possible to take photos here, while the eastern cargo ramps can also be seen from here, as well as runway 06/24. On an irregular basis both viewing areas are closed though, at which point a stairways inside the terminal to a conference center (from "CaféBistro Leysieffer" up) may be useful.
Inside terminal 1C, on the route to terminal 2, fishrestaurant "Gosch" has a large window which gives an overview of the eastern platforms and runway 14L/32R.

This spot can be reached by walking from the terminal towards the construction site for the ICE train. This is a good spot for taking pictures of aircraft landing on runway 14L in the afternoon, although they are still high in the air. Following the footpath next to the fence eventually brings you to spot 3 and 4 as well.

Leaving the terminal towards the A59, you take the first exit again (Porz/Grengel). At the second traffic lights, you turn right and after some 300 meters -at the next traffic lights- right again onto the Alte Kölnerstrasse. After a turn to the right there are parking places on the left side of the road, with a footpath towards the fence. This is a good spot for taking pictures of the landing aircraft in the morning, when runway 14L is in use.

A bit further south there is another footpath towards the fence, which will get you opposite the point where aircraft turn on the runway for taking off from runway 14L.

When you keep on driving on the Alte Kölnerstrasse, you will cross the landing for runway 24. This is a perfect spot when this runway is in use. Best is to park your car a couple of hundred meters down the road, where it bends to the left. With a decent binocular (at least 40x) you can also read off most of the airplanes on the south eastern cargo platforms ("Platform F2"), while you also have a good view on storage areas L and X if you walk somewhat back along the fence from the parking towards spot 5.
From the abovementioned parking spot you can also walk onto a grassfield with some small 'hills'. When you climb one of those, when the trees are bare, you can see the P166 on the other side of the runway.

Taking exit Porz/Grengel again, you now go to the left at the second traffic lights, towards Grengel/Wahn, which is the Grengeler Mauspfad. After some 350 meters you turn left again; there is a small sign "Kaserne" there. After 200m turn right again, into the Kriegerstrasse. About halfway you have a limited view on the western cargo platforms; with a good binoculair you can read some of the aircraft there.
At the end of the road you will find the main entrance to the military area, with right behind it the preserved Fiat G-91.

Following the Grengeler Mauspfad again, this will continue into the Weststrasse. Here you drive along the fence of the military airbase. When you look through the trees and buildings both the FIAT and F-104 "BB+374" are visible.

Continuing on the Weststrasse, after about 1.5km there is a turn to the left with a sign "DLR" (Deutsches Zentrum für Luft- und Raumfahr)]. This is the Flughavenstrasse. After some 600m -you already passed a second military gate- there is a small parking lot at your right hand side. When you park your car here and walk along the footpath to the left of the lake, you will get behind the military platform on the south side of the airport. This might be useful when something is parked here which could not be read off from the terminal. Photography is not possible here, though.

Walking to the south from the parking place, you will find a footpath crossing the grassfield. Follow this path towards the fence and you will reach a small mound. Standing on this mound you can make good pictures of the landing aircraft during the morning, on the rare occasions that runway 32R is in use. You have a limited view of the airfield here, though.

Some 400 metres down the fence from spot 9, you reach a clearing in the woods near the end of the runway. During the morning this is a good spot for photography for aircraft lining up on runway 32R. 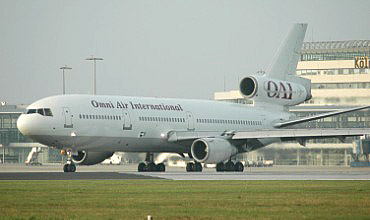 Spot 4 is a nice location for photography during the morning. (G. Schmidt) 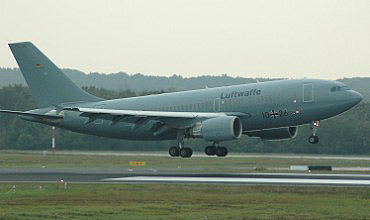 It is not in use on a regular basis, but landings on 32R can be shot from spot 9. (G. Schmidt)
Frequencies
Based
Preserved
Links
Other Airfields
Send Updates!