Keflavík Airport, usually referred to as Reykjavík (the nearby capital) by the airlines, is a joint civil and military airport with occasional military visitors and exercises. It is the home base of the larger Icelandic airline companies and a major gateway into the country. Icelandair, WOW Air, easyJet, Norwegian and SAS provide year-round services, joined by many European airlines and Delta from the US during the Summer season. The airfield is a former US Navy base originally built during WWII to serve as a stopping point for bombers on their way across the Atlantic to Europe - a role it still serves for both civil and military traffic. During the cold war, Keflavík became an important base for surveillance and defense of the Atlantic. Permanent military aircraft presence ended in 2006, when the US Navy left the base.

To avoid unnecessary airport security attention, do not park your vehicle too close to the fence. If questioned by security personnel, simply explain what you are doing as an aircraft enthusiast and identify yourself when asked. The majority of staff will understand and let you continue. If not, they will ask you to move away from the fence, so please respect that.

Two 3000 meter-runways remain in use, oriented north/south and east/west. The terminal, airline and cargo facilities are located on the north side of the field. On the east side, the location of the former NAS Keflavik, military and general aviation traffic is handled. South of that begins a specific security area operated by the Icelandic Coast guard. The area is used for air police operations and other NATO movements. The coast guard main facilities are just east of runway 02 but the security area also includes 13 hardened aircraft shelters just south of runway 10.

From Reykjavik city, it is a 40-minute drive to Keflavik airport. There are also frequent FlyBus schedules to and from Reykjavik. Most foreign visitors will obviously arrive at the airport. Due to the distances around the field, a vehicle is recommended for spotting at Keflavik.

Around The Airport
1
Terminal area

A few meters east of the terminal (arrivals side) you get a good overview of the even-numbered gates 2 through 10. If you walk through the parking lot and position yourself behind the bus parking area, you will find good spots for approaching traffic and aircraft taxiing for runway 20. On the west side of the terminal (departures side) the gates 1,3,5 and 11 get in view through the fence, as does the cargo apron.

Road 41 between the terminal and the roundabout lies under the approach for runway 20. From here, you will have a good oversight of the final approach and simply by walking around you can choose the spot and angle you like. There is a taxi/bus parking that buses or taxis do not use at all. This is a safe place to park your vehicle. Optional parking would be the gravel roads that lead up to the fence, or the rest area described with spot 3.

There is an official rest area along main road 41, south of the connection to Keflavik via Adalgata. This is a safe place to park a vehicle and from here, it is a 900 meter-walk to the centreline of runway 28. Walking in the other direction, one gets good views from the west on landings on runway 20.

South of spot 3, a gravel road leads up to a large, flat, grey water tank. From there you can see a small fraction of the east-side service area and spot approaching traffic for runway 28.

Not a single spot, but it is interesting to look around the old US naval base. Today, this area referred to as Ásbrú, hosts the Keilir educational institution plus industrial and technological activities. In Ásbrú, there are serval spots where you can glance at the east-side service area. Aircraft location and accessibility can change from day to day.

Runway 10 is the least accessible one, so if you want a relatively close look you need to walk. The shortest path from the main road is a 2.5 km old road that leads to the fence. The only vehicles that can access this road are 4x4 vehicles, but note that this is is not an official road and that off-road driving is illegal in Iceland. From spot 7, you have a good view on traffic landing on 11 and you can see the hardened aircraft shelters.

Road 45 lies under the approach to runway 10, but the runway end is not visible from the road. A good landmark for orientation is the church just north of the runway centreline. Depending on your lens and the time of day, you should be able to find a decent spot along road 45. The road is narrow so park only where other vehicles can safely pass you. 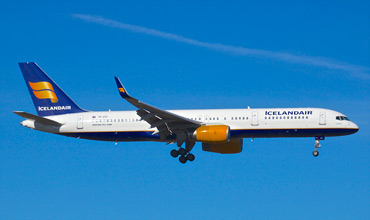 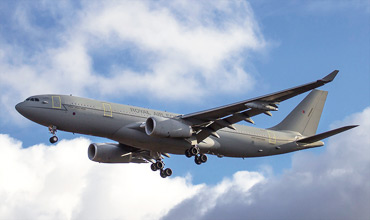 On the opposite side of the field, this Voyager was seen landing on 02. Photo from spot 6 by Karl Karlsson.
Frequencies
Based
More Info
Links
Other Airfields
Send Updates!